More young people in Singapore have been seeking help for mental disorders such as depression - but many people know little about these disorders and are unable to empathise with those afflicted with them.

To address this, Mr Vishnucharan Naidu, a student in the applied drama and psychology course at Singapore Polytechnic (SP), worked with four classmates to stage an interactive play inspired by forum theatre, titled in(VISIBLE).

"We often find ourselves in a position where we want to solve problems for people, because we are geared that way. But that might not be what a person with a mental disorder needs, and some of the things we say, like telling them to 'snap out of it', can make them feel unsafe," said Mr Vishnu, 21, who is in his last year of the course.

Based on research and interviews, the group scripted three scenes that depict the daily life and struggles that young people with conditions such as depression, anxiety and psychosis go through.

The audience could then choose to intervene in the scenarios the second time, replacing a character in the scene to come up with alternative actions that could improve the situation. 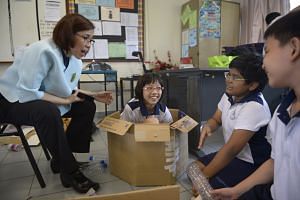 Drama-based teaching on the rise 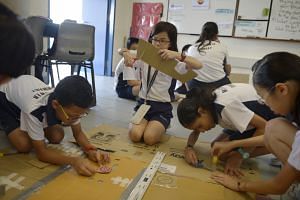 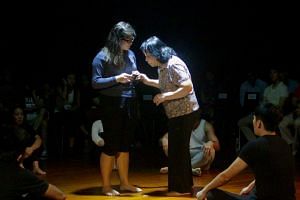 Theatre is more than just the show on stage

Before the scenes were staged, audience members were given a presentation about the mental disorders. They were also taken on a walk through a gallery filled with words representing the stereotypes people with mental disorders have to put up with, such as "snap out of it", "it's all in your head", "useless", "slow" and "lazy".

The play was first presented at his school last year before it was re-staged at youth hang-out *Scape last month, with a total of 250 people attending two runs of the show.

It was part of his final-year project for the course, introduced at SP in 2008 under the school of communication, arts and social sciences.

Mr Vishnu, who hopes to pursue further studies in theatre after graduation, is in discussion to stage the play at other places, such as schools, universities and social service organisations. He believes theatre has a role to play in transforming social perceptions.

"During one of the interventions in the play, a member of the audience stepped in to demonstrate how family members can be more understanding towards those who have depression.

"After that, he shared some of the struggles he himself faced while he was growing up, and how a counsellor helped him out.

"It was a very different kind of silence that followed. I was very encouraged - I didn't ask him to share, but he did it of his own accord."