SINGAPORE - She may not be sparkly like C-3PO, the golden droid of Star Wars fame, but humanoid robot Nadine glows with a charm of her own.

She looks almost like a human being, with a full head of hair and dewy skin.

And she has a personality to boot. Nadine is capable of holding a conversation, remembers what she was told previously - and gets angry if she is insulted.

Nadine is one of two robots unveiled on Tuesday (Dec 29) by the Nanyang Technological University's (NTU) Institute for Media Innovation.

Like her creator Professor Nadia Thalmann, Nadine is 1.68m tall. She cannot walk, but Prof Thalmann said making her mobile would be the next goal for researchers. 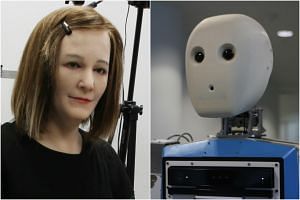 "Robotics technologies have advanced significantly over the past few decades and are already being used in manufacturing and logistics," said Prof Thalmann, from the NTU School of Computer Engineering.

"As countries worldwide face challenges of an ageing population, social robots can be one solution to address the shrinking workforce by becoming personal companions for children and the elderly at home. They can even serve as a platform for healthcare services in the future."

The other robot star is Edgar, which is entirely made in NTU. But unlike Nadine, he is built mainly as a service robot, instead of as a robotic companion.

NTU scientists have built two versions of Edgar. Edgar 1 is a robotic avatar, which means it carries out the actions of a human over long distances. By standing in front of a specialised web cam, the user's face and expressions will be displayed on Edgar 1's "face". He will also mimic the user's upper body movements.

Edgar, a tele-presence robot that reenacts the actions of its human user

Edgar 2, which was built over nine months and made ready two months ago, is more autonomous that Edgar 1. Instead of relying on a human user to control its movements, Edgar 2 can do so on its own.

Edgar 2, a robot developed by the NTU's Institute for Media Innovation.

Researchers hope that Edgar 2 can be placed at public venues like shopping malls, airports and tourist attractions to give practical information, such as directions, to visitors.

"The user may project his or her physical presence at one or more locations simultaneously, meaning geography is no longer an obstacle. In the future, a renowned educator giving lectures or classes to large groups of people in different locations at the same time could become commonplace.

"Or you could attend classes or business meetings all over the world using robot proxies, saving time and travel costs."