SINGAPORE - Science teacher Mohamed Azhar Mohamed Noor thinks way outside the box when it comes to teaching his charges about animal adaptation and evolution.

Instead of using "textbook" examples such as eagles ripping flesh from their prey, he gets his pupils to draw Pokemon characters with different features that he then hides around Innova Primary School.

To win the game, his pupils have to find the drawings and identify the Pokemon's distinctive characteristics and functions.

"Children may not remember the text or the things you say, but they remember activities and how you made them feel."

The innovative teaching method helped Mr Azhar clinch one of the illustrious President's Award for Teachers on Wednesday night (Sept 4).

The seven winners were selected by a panel chaired by Ms Denise Phua, head of the Government Parliamentary Committee for Education, out of a pool of 3,886 individuals nominated by school leaders, teachers, parents and students.

The teachers will join an overseas conference and study trip at the end of the year as part of their professional development.

Dr Koh, 39, a senior analytics lecturer, co-developed artificial intelligence software that can detect the emotions of her students to help them learn better.

The system uses a webcam to capture expressions - the eyes, eyebrows and mouth - to identify signs of frustration. It also gauges a student's mental state through speed of typing and mouse clicks.

The software is programmed to provide pop-up hints when it recognises a student is stuck or on the verge of giving up.

Frustration in students is quite common when it comes to learning how to code, Dr Koh said. Class sizes of about 25 can make it difficult for teachers to reach every student.

Dr Koh, who has a PhD in information systems, has also linked the system to a data dashboard so tutors can see patterns in the topics that students are weak in.

She said: "Emotions are integral to learning; they can affect how students understand and apply their knowledge. We don't want our students to give up because they feel frustrated with a problem."

Mr Syam, 54, aims to motivate and educate "troubled" students who are struggling with academics and other challenges.

He started an activity club in Bukit Batok Secondary School in 2006 called the One Earth Club, where members raise awareness of environmental issues and do half-day treks around Singapore each month.

"I created this club to 'catch' Normal (Technical) students who dropped out of their CCAs (co-curricular activities). Some were demoralised when they had no leadership opportunities because they were struggling academically and needed to focus on their studies," said Mr Syam, who has been teaching N(T) science for over 20 years. 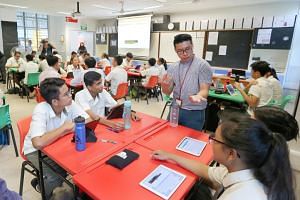 The club has created chances for them to lead, for example, during coastal clean-ups that were open to other students in the school.

"I repeated Secondary 4 when I was younger, and that experience shaped who I am today. I can understand how my N(T) students feel and I can empathise with them," he added.

"This phase of life is very important. If we catch them early and make sure they come to school, I know they will succeed."