With two years left before the revamped PSLE scoring system kicks in, parents of the first batch of pupils are starting to feel anxious about making sense of the changes. But primary school principals said they will be reaching out to them, to allay worries and explain the new system.

On top of next year's Primary 5 pupils getting their results based on the new Achievement Level (AL) system in preparation, several principals said briefings and meetings with parents are already on the cards.

Said Radin Mas Primary School principal Muhammad Farizal Umar Effendi: "The school will be engaging the parents next week through a breakfast session to explain the changes, and will also be explaining the changes at the annual parent-teacher meeting."

Importantly, said Kong Hwa School principal Cheong Ye Ling, the changes "will not affect the teaching and learning of pupils, as there are no changes to the curriculum".

The Ministry of Education (MOE) will also, in 2021, tell parents about the indicative cut-off points for secondary schools by the middle of the year. This is usually done in either October or November, after the PSLE.

Bringing this forward is meant to help parents make informed choices when selecting secondary schools, especially since the order in which the choices are listed will be an important tie-breaker when two pupils have the same score. Still, some parents hope for more information earlier. "The cut-off points in terms of ALs should be released much earlier, given that there are no previous year's scores to compare against," said Mrs Canimorly Nair, 40, whose daughter will be in the 2021 PSLE batch. She works in the education sector.

THEY CAN STILL COMPARE

Whether it is 300 or 32, it is still a number that children can compare.

PILOT SHAHRUDIN ZAINUDDIN, who has a child in Primary 2.

To me, it is still a system very much focusing on results at a very early age.

UNIVERSITY LECTURER FRANCOIS BRETAULT, who has a son in primary school, noting that although the new system is a move in the right direction, it is not without flaws.

This change is just operational, and will not affect the teaching and learning of the pupils, as there are no changes to the curriculum.

With MOE also urging parents to choose secondary schools that will cater to their child's learning needs and interests, experts also stressed the need for a high level of outreach to the parents. Said Dr Jason Tan, an associate professor in policy and leadership studies at the National Institute of Education: "This means pupils and parents must now put in greater thought when choosing a school, and inevitably there would be segments of parents who would not be so well-positioned to make such decisions.

"One challenge, moving forward, is how MOE and schools can better engage these parents to play a more active role in making an informed decision for their children."

Mr Bernard Lee, 56, a chief information officer at a multinational conglomerate, has a daughter who is in Primary 4. And he agrees with the approach of looking at secondary school education in a holistic manner. "We should take into account how our child is developing, and what kind of programmes and skills they are interested in and what schools have to offer."

Many parents are still in two minds over whether the changes will have the desired impact or if they go far enough in reducing stress for pupils.

When MOE announced in 2016 it was changing the PSLE scoring system by doing away with the T-score, the ministry said it was to reduce over-emphasis on academic results and to reflect a pupil's own level of a achievement instead of comparing him with his peers.

Pilot Shahrudin Zainuddin, a 45-year-old parent of a Primary 2 pupil, believes pupils will continue to put pressure on one another. "Whether it's 300 or 32, it's still a number that children can compare."

While the new system is moving in the right direction by having less emphasis on grades, university lecturer Francois Bretault, 51, said it is still a system "very much focusing on results at a very early age", reflecting the key bugbear of the PSLE system - that it sorts children at a young age. The permanent resident worries about putting his Primary 4 son through too much stress and instead focuses on encouraging him to do his best.

Experts told The Straits Times that for mindsets to change, all stakeholders have to be involved. They also urged parents to consider the recent changes to the education system as a whole.

Pointing to an increase in apprenticeship and work-study programmes, and more emphasis on skills such as critical thinking and creativity instead of just paper qualifications, for instance, National University of Singapore sociologist Tan Ern Ser said: "When coupled with the other transformations taking place, I believe parents and pupils would get the message and make the necessary adjustments."

Because the PSLE is still a placement exam, stress is inevitable, said psychotherapist Yvonne Lek. What is important is how the child copes, and this also depends on his parents and his classmates. "Any step towards helping kids understand that this is not as high-stakes is very important," she added.

Frequently asked questions about the changes

The Ministry of Education (MOE) announced yesterday more details about the upcoming PSLE scoring changes that take effect in 2021, and which will affect this year's Primary 4 pupils. This adds to what was announced in 2016.

Here are the answers to some frequently asked questions.

Q What exactly are the new changes announced yesterday?

A There are four main components to the new announcement.

First, starting from next year and in all subsequent years, pupils entering Primary 5 will be graded on Achievement Levels (ALs) 1 to 8 instead of the current grades A* to E.

Doing this from Primary 5 will allow pupils and parents to become more familiar with the new scoring system for the PSLE, said MOE.

Second, MOE said it will release the cut-off entry scores for each school using ALs, instead of the current T-score, by the middle of 2021.

Usually the entry scores are derived from the previous year's posting exercise and given to students between October and November.

Third, those who take Foundation level subjects will know how their scores are graded in the new system. They will receive grades of AL A to C, which are tagged to AL 6 to 8 scores for Standard level subjects.

Lastly, MOE has announced the eligibility criteria for Higher Mother Tongue. Pupils will need an overall PSLE score of eight or better to take it up in secondary school.

For pupils who do not meet the above criteria, secondary schools will have the flexibility to offer Higher Mother Tongue to students assessed to have high ability and interest in mother tongue languages. This is similar to the existing practice.

A The biggest announcement then was that each Standard level PSLE subject will be scored using eight bands known as Achievement Levels, with AL 1 returning the best score of one and AL 8 the worst score of 8.

The total PSLE score will be a sum of the scores for the four subjects, and the range of possible scores will be four to 32, with four being the best and 32 the lowest.

The new ALs reflect each child's level of achievement, rather than how he has performed relative to his peers.

Q The new AL system groups pupils with 75 marks and above into four AL bands (AL 1 to 4), instead of the current A* and A grades. Doesn't this contradict MOE's aim of reducing fine differentiation?

A There is a need to balance having too many ALs with too few, said MOE. If there are too few ALs, there will be more pupils with the same PSLE score, which will lead to more balloting for Secondary 1 school postings. 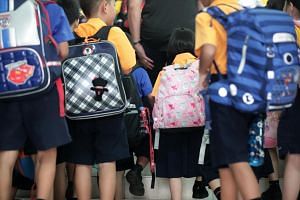 The upper range is narrower to better differentiate pupils' level of understanding, as a large majority are able to show an understanding of the curriculum and do well in it.

At the middle to lower ALs, wider ranges are sufficient to indicate a pupil's progress, and further differentiation is less educationally meaningful, said MOE.

Q If my child takes Foundation subjects, will he still be able to qualify for Express?

A If your child takes at least one Standard subject out of the four, he will still have a chance to qualify for the Express stream, as long as he meets the score criteria.

Additionally, when he enters secondary school, he will be able to take different subjects at different levels, as long as he can manage his academic load.

Pupils should decide to take a subject at Standard or Foundation level depending on their aptitude for and ability in that subject, rather than whether it will help get them into their desired stream, said MOE.

Q Why are the Foundation subject ALs pegged so low when using the Standard subject ALs?

The assessment load at Foun-dation level is less demanding, said MOE. Foundation subjects cater to the learning needs of students so that they can pursue learning at a pace and level that is more suited to them.

Q If my child takes Higher Chinese, will he have an advantage for the Secondary 1 school posting?

A Yes, but only if your child is applying to a Special Assistance Plan (SAP) school.

If two pupils have the same PSLE score, the one with better Higher Chinese grades will be allocated a place ahead of the other pupil.

This posting advantage applies before the other tie-breakers for Secondary 1 posting.

There will be no bonus points under the AL system like there used to be with the T-score system.

Q Why is it important that my child ranks the schools he wants by order of preference?

Previously, choice order of schools did not matter as an unrounded T-score aggregate - down to decimal places - was used to determine which child would get in ahead of the other.

This tie-breaker recognises the different considerations that pupils and parents have in making school choices, such as a school's ethos, culture, programmes and co-curricular activities offered.

Q If I am still confused about all these changes, what should I do?

A In the next few months, schools will be engaging pupils who will undergo the new PSLE scoring system, as well as their parents, to guide them in making informed decisions, particularly in their subject choices at the end of Primary 4.

More details on the PSLE scoring changes and Secondary 1 posting system are also available on the MOE's website: http://www.moe.gov.sg/psle

Do you have questions on the new PSLE scoring system? E-mail senior education correspondent Sandra Davie at sandra@sph.com.sg

Everything you need to know about the new PSLE changes

A version of this article appeared in the print edition of The Straits Times on July 26, 2019, with the headline 'Schools to reach out to parents to allay concerns'. Subscribe
Topics:
More
Whatsapp Linkedin FB Messenger Telegram Reddit WeChat Pinterest Print Purchase Article Copy permalink