Forget about the well-deserved break this December school holiday. Parents are signing up their children for study boot camps to get a head start in the academic rat race.

Some turn up for such hothousing sessions, hoping to guarantee the A grades at the Primary School Leaving Examination (PSLE), O or A levels. Never mind that the high-stakes national examinations are a year away.

The 15-year-old Methodist Girls' School student, who hopes to snag at least an A2 grade for the subject at next year's O levels, said: "There's more time during the holidays to revise, and I want to make use of it. I feel quite nervous about the O-level exam because it will determine my future."

Many parents are sending their children for cram sessions to learn, way in advance, topics that will be covered after school reopens next month.

Mrs Pauline Lim, paid $170 for her 10-year-old daughter to attend a two-day workshop on mathematics at Concept Math Education Centre last month. Her child, who will start Primary 5 at Pei Chun Public School next month, learnt topics such as percentage and ratio.

ENOUGH TIME FOR PLAY TOO

The year-end holiday is long and there is time to play, rest and learn new things. Since my child is not attending any maths tuition, a short workshop is suitable to introduce her to a demanding curriculum that she will face next year.

MRS PAULINE LIM, who paid $170 for her 10-year-old daughter to attend a two-day workshop for maths at Concept Math Education Centre last month.

"The year-end holiday is long and there is time to play, rest and learn new things," said the music instructor, 41. "Since my child is not attending any maths tuition, a short workshop is suitable to introduce her to a demanding curriculum that she will face next year."

Mrs Lim said her daughter is limited to homework from the tuition centre, a lighter load than what she would get from her school.

Tuition and enrichment centres are seeing a jump in the number of students taking up such intensive study sessions this December school holiday. A few even have waiting lists of up to 20 students.

Concept Math has more than 100 pupils attending its workshops this year-end school break, up from fewer than 50 last year. A two-hour workshop can cost between $75 and $85.

The centre, which has two branches, in Novena and Bukit Timah, started offering intensive holiday workshops two years ago.

Ms Janice Chuah, its founder, said: "Initially, we thought that holidays are for rest and self-revision. But the demand from parents and students is really great."

These study camps may have a counterproductive effect if students or parents take them to the extreme... A mental break from study is always needed to give the student a chance to recharge.

She said some parents get upset if such workshops are not offered, as they feel their kids "will lose out if their holidays are not utilised".

Concept Maths previously closed its centres in the school holidays.

At Bright Culture, which has a branch each in Novena and Kembangan, some 100 students have gone through O-level crash courses for chemistry, physics, and elementary and additional maths this holiday period. Last year, there were about 50 students.

A two-day course costs $268. Besides revising key topics, students have assignments to complete.

Mr Joel Liu, the centre's founder, said this holiday period is crucial for those taking major exams next year.

"Parents have dreams of their kids entering the best schools and they want to take action if their kids are struggling," he added. "If (the students') foundations are weak, they will struggle even more next year."

Other centres, such as Potter's Clay Education and School Plus, said parents sign their kids up for revision workshops or preparation courses as they do not want them to "lose the momentum" during the long break.

Winners Education Centre co-founder Sean Chua said a handful of students who score A or B grades attend its workshops. "There is usually no school during this period and students can learn in a more relaxed environment," he noted. 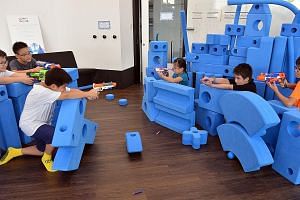 Taking a shot at new skills in year-end break

Mr Jerry Theseira, managing director of EduGrove Mandarin Enrichment Centre, said that the holiday is a "good opportunity to work on the child's weaknesses".

Education experts, however, warn that sending students to such cram sessions during the holidays may lead to undesirable outcomes, such as stress or loss of motivation.

"An hour more devoted to such camps means an hour less for the child to engage in other pursuits which may be just as important for child development, such as learning a new skill or spending time with family and friends."

He added: "These study camps may actually have a counterproductive effect if students or parents take them to the extreme.

"After all, students require down time. A mental break from study is always needed to give the student a chance to recharge, so that he will be in a better position to deal with the academic experience ahead."

A version of this article appeared in the print edition of The Straits Times on December 12, 2016, with the headline 'School's out, but the lessons go on'. Subscribe
Topics:
More
Whatsapp Linkedin FB Messenger Telegram Reddit WeChat Pinterest Print Purchase Article Copy permalink