Thank the past, make the future thankful

A commemorative book from the school's official opening in 1966, an old school bell and letters from its alumni to future students.

These were among 50 items that students and staff of New Town Secondary School voted for, and put into a time capsule last Thursday.

The time capsule has been placed on a walkway outside the canteen, with the items prominently displayed, instead of being buried.

Vice-principal Gideon Yong said: "We want students to be able to see the items related to the school's rich history and culture. It helps them understand that many people have contributed to the school for it to be what it is today. And now, the school is in their hands. They can think about how they can contribute and give back to the school." by paying it forward and doing good for others. 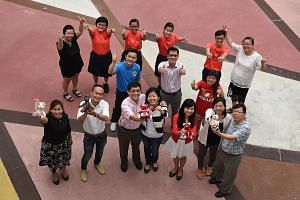 Many have embarked on charity projects supported by SG50 Giving, launched by the Ministry of Education earlier this year. Under the initiative, the ministry gave a sum of money to schools, junior colleges, polytechnics and the Institute of Technical Education (ITE) to use for causes that they identify with.

We want students to be able to see the items related to the school's rich history and culture. It helps them understand that many people have contributed to the school for it to be what it is today.

The initiative aims to encourage students to think about how they can work with registered charities, as part of the values education programme in school.

In one of the ITE's projects, students worked with the Teck Ghee Citizens' Consultative Committee to repair taps and install grab-bars in flats in Block 420 in Ang Mo Kio Avenue 10.

The students surveyed each household to determine the kind of assistance required, before carrying out the basic installation and repair works. They also
gave fire extinguishers and first-aid kits to the residents.

Republic Polytechnic chose to lend a hand to the Singapore Association for the Visually Handicapped. Social enterprise management students organised a Dining in the Dark session in February this year, where participants had a meal in complete darkness for an hour.

The event aimed to raise awareness of the challenges that visually handicapped people face in their daily lives. The polytechnic plans to hold another run later this year.

Evergreen Primary School in Woodlands donated its $20,000 to non-profit group Food From The Heart, which distribute food to the needy.

Since 2005, the group has been providing food packs to the school's low-income pupils. Each pack contains items such as biscuits, rice and noodles, which can last a family of four to five members for about one month.

In recent years, the school's staff and students have helped the organisation pack goodie bags for its beneficiaries.

Vice-principal Chua Lay Na said: ''Wedecided to give back to Food From The Heart to affirm and appreciate the good work it has done.''

The school also got pupils to pen their thoughts on why there is a need to donate.

Mrs Chua said: ''We wanted to give purpose to the act, and get them to understand why the partnership started.''

Juying Secondary School in Jurong West donated its $20,000 to its long-standing partner, non-profit group Tzu Chi Foundation. Principal Seet Tiat Hee said: ''We have a number of studentswhoare on financial assistance schemes and Tzu Chi provides some of them with food coupons and a transport allowance. The SG50 Giving fund is a good way for us to givebackto it.''

A version of this article appeared in the print edition of The Straits Times on August 10, 2015, with the headline 'Schools give back to mark SG50'. Subscribe
Topics:
More
Whatsapp Linkedin FB Messenger Telegram Reddit WeChat Pinterest Print Purchase Article Copy permalink