Schools here have wrapped up their year-end exams and are winding down for the holidays, but yesterday was still a "first day" of sorts for about 1,600 Raffles Girls' School (RGS) students.

The students, along with 180 staff members and 150 invited guests, were at the opening of RGS' new campus at 2 Braddell Rise.

Raffles Institution (RI) is across the road in Bishan. The schools are now connected via an overhead pedestrian bridge linking bus stops on both sides of Braddell Road.

The RGS project, which has been seven years in the making, cost $90 million and was co-funded by the school and the Ministry of Education (MOE).

New students will start at the Braddell Rise site in academic year 2020, while current students will finish up the last week of this school year, ending on Friday, there.

RGS principal and alumna Poh Mun See, 50, said she was glad to have been part of this chapter of the school's journey, from almost start to finish. She has helmed RGS since the end of 2012 - the year the move was first raised - and will step down in December to return to MOE as a cluster superintendent.

Mrs Poh will be replaced by Madam Haslinda Zamani, former principal of Tanjong Katong Secondary School, who is currently a cluster superintendent at MOE. 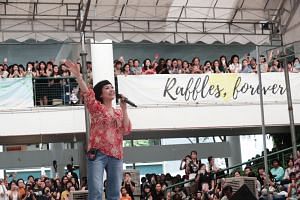 RGS wants to get to know Braddell

Mrs Poh said: "Saying goodbye is never easy. But I must say this is a good place in the school's history, or calendar, to hand over the reins to someone else. There are so many possibilities."

While the new campus is about 2.5ha larger than the old one in Anderson Road, Mrs Poh said the intake of Sec 1 students next year would remain constant at about 400.

The school has plans to expand a mentorship programme that matches RGS students with pupils of schools in the area. Marymount Convent, First Toa Payoh Primary and Kheng Cheng are three primary schools currently in the programme called Triple C, which stands for care, collaboration and community.

The school is also considering offering the Raffles Scholarship, alongside RI. The scholarship requires one-to-one matching for funds from donors, which Mrs Poh said RGS was not able to do as it had been tied up with the new campus.

Jalan Besar GRC MP Denise Phua, who graduated from RGS in 1975 and was present yesterday, said it was a nostalgic morning.

Said Ms Phua, who chairs the Government Parliamentary Committee for Education: "My wish for the incoming batches is for them not to take these blessings of abilities and facilities for granted, and to strive to do their very best to help create a better age for all Singaporeans."

RGS old girl Peggy Looi, 57, who as a student sang with the school choir, was part of a team that authored and sold a cookbook to help the school's fund-raising efforts. She said the funds they raised went towards building the new performing arts centre, which has an auditorium and black box with state-of-the-art equipment, among other facilities.

The school also has an innovation hub that provides students with resources such as unmanned vehicles or drones, 3D printers and research laboratory equipment.

Chinese teacher Zhang Hao, who has spent 22 of her 30 years as an educator in RGS, said she has many fond memories of the old campus, but is looking forward to the fresh start.

"It is sad to leave the old campus because of the specific memories that were made there. The new school takes some getting used to - but at the end of the day, it is about the company you keep," she said.

The 140-year-old school, which had been at its site off Stevens Road since 1959, had to be relocated as the campus, built for about 1,700 students, was no longer adequate and the land lease was coming to an end.

The school had said previously that being situated opposite RI would provide for closer collaboration between the two schools.