SINGAPORE - They may have been in a classroom about 23km from the Sultan Mosque, but that did not stop the pupils of Qihua Primary School from touring the iconic place of worship in Kampong Glam.

On Tuesday morning (Sept 22), the children went on a virtual excursion of the mosque from the comfort of their classroom in the school in Woodlands.

It is part of a trial by the National Heritage Board to tap technology so schools can still "visit" national monuments.

They controlled the robot remotely using a computer, with a tour guide accompanying it in the Sultan Mosque.

The tour guide also took questions from the children.

The robot allowed them to zoom in on objects of interest, for instance, the mosque's architecture and furnishings, which were heavily influenced by the Indo-Saracenic style - a combination of traditional Indian and Islamic elements with European architectural features.

The pupils also used the robot to navigate around parts of the mosque usually not accessible to the general public for tours, such as the ablution area - a place for cleaning or washing - and the prayer hall.

With its assisted driving function, the robot can adjust its speed to the surroundings to avoid knocking into people or objects.

It was a first for schools here.

Mrs Lee Hui Feng, principal of Qihua Primary School, said: "The virtual live tour at Sultan Mosque was a wonderful way for our students to experience Singapore's rich heritage, especially during this period of disruption. 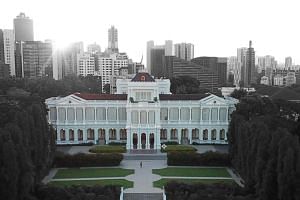 Neither dusty nor old: Youth come up with fresh ways to document heritage during Covid-19 pandemic

"Virtual experiences like this can open up new possibilities for young people to discover Singapore and beyond."

The mobile telepresence robot is currently in use at Sun Yat Sen Nanyang Memorial Hall and the Indian Heritage Centre under another NHB programme, which is targeted at people who are unable to go on heritage tours due to old age or sickness, or have mobility issues or physical disabilities.

Mr Alvin Tan, NHB's deputy chief executive (policy and community), said it is testing the Monumental Robo-Tours programme with Qihua Primary School and Edgefield Primary School before making it available for booking for all primary and secondary schools from October.

"We developed this programme because we note that students are encouraged to stay-in-school and, as a result, some students may be missing their regular learning journeys to our monuments," said Mr Tan.

"We hope to continue to provide safe access to our monuments by 'transporting' students to our monuments digitally and help them stay connected to Singapore's built heritage in an immersive and innovative way."

Besides Sultan Mosque, monuments such as the Former Fullerton Building and Chesed-El Synagogue will come on board the programme next year. In time to come, NHB hopes to add more of Singapore's 73 national monuments to the list.

Interested schools can register for 45-minute slots from October by e-mailing NHB_NationalMonuments@nhb.gov.sg.

Since July, these digital initiatives have reached out to 29 schools and been viewed more than 19,000 times.