98.4% of pupils who sat national exam eligible for secondary school, the same number as past two years

It was a day of apprehension, and then either delight or disappointment, for nearly 40,000 Primary 6 pupils and their parents yesterday as they returned to school to collect their Primary School Leaving Examination (PSLE) result slips.

"It is a valuable experience that inculcates discipline, teaches you to work towards your goals. It is also an event that often brings parents and child closer together.

"But it is just one of many more milestones to come, and it certainly will not determine how your life will unfold."

A similar message was delivered by Geylang Methodist School (Primary) principal Jennifer Choy, who spoke to the pupils' parents before releasing the results, telling them to affirm and encourage their children's efforts regardless of how they performed. She said: "These three digits (the results) do not represent a child's worth... We should look for opportunities to celebrate."

Like their seniors in the previous two years, the 39,672-strong class of 2018 has seen 98.4 per cent of pupils who took the PSLE doing well enough to progress to a secondary school.

It matched the number set in 2016 and last year, and remains the best performance since the national exam was introduced in 1960. 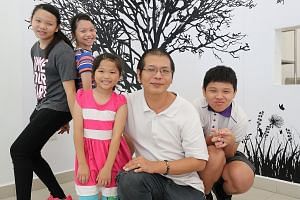 She chose Spectra even before getting her PSLE results

Among those collecting their results yesterday was Geylang Methodist (Primary) pupil Krystal Chan, who lost her mother to colon cancer in April.

In the period of her grief, she was crying every night looking for her mum... Any single parent in that situation would be struggling, but she gave me strength and support.

MR JOEL CHAN, on how they coped after his wife died in April from colon cancer.

"I was positive she would fight through, but even though she didn't, (towards the end) we tried to be there for her as much as possible," said Krystal, 12.

Her mother was 50 when she was diagnosed in November 2016.

"She still tried to make sure I studied and read my textbooks. She wanted me to be a doctor so I could help people like her."

Her 52-year-old father, who quit his job as a marine engineer, helped her through the exam period.

Krystal scored 221 points in her PSLE, but she has already secured a place in Zhonghua Secondary under the Direct School Admission exercise through her co-curricular activity, choir singing.

Her father, Mr Joel Chan, said: "Academics are important but so is character - she is resilient.

"In the period of her grief, she was crying every night looking for her mum... Any single parent in that situation would be struggling, but she gave me strength and support." He added with a wry smile: "We cried together a lot."

They will be able to access the online system to submit their secondary school choices up till Wednesday afternoon.

The Secondary 1 posting results will be released on Dec 19.