More established schools cite their own survey results, saying CPE poll should not lump institutions together

Private schools should not be lumped together when considering employment rates for the sector.

This was the response from the more established private schools, such as the Management Development Institute of Singapore (MDIS), to a survey released yesterday which found that employment rates of graduates from nine private schools compared poorly to those from public institutions.

The Council for Private Education (CPE) survey found that 58 per cent of those who graduated from nine private schools in 2014 found full-time jobs within six months of completing their studies.

This is much less than the 83 per cent for graduates from the National University of Singapore, Nanyang Technological University and Singapore Management University.

The Singapore Institute of Management (SIM) said its own survey for the class of 2014 found 73 per cent of its global education graduates had full-time jobs within six months. More than half of those surveyed had two or more job offers. 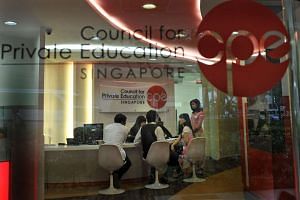 It also reported an average gross monthly pay of $2,766 for graduates with full-time jobs, compared with the survey's $2,700. The median starting pay for those from the three public universities was $3,200.

SIM's global education arm, which has an enrolment of 20,000 students with 16,400 locals, said "the employability of our graduates is a priority", adding that it has been putting in place measures to enhance the employability outcomes of its graduates. For example, it provides career counselling and offers internship opportunities.

MDIS secretary-general R. Theyvendran quoted a 2014 survey done by the school which found that about eight in 10 of its students found full-time or part-time jobs six months after graduating.

He said: "It was not fair to put all the schools in one basket."

The CPE survey looked at nine schools of varying repute. In addition to the more established players such as SIM, MDIS and Curtin Education Centre, the survey included ITC School of Laws and Trent Global College of Technology and Management, which are less well known.

James Cook University Singapore, the first of two private schools to win the EduTrust Star - the highest quality mark given to private education institutions here, said its own survey of students who graduated at the end of 2013 and in 2014 found more than seven in 10 were settled in jobs within six months. Private school graduates interviewed about the survey findings had mixed reactions. Some said the CPE's findings were reflective of the market, while others felt the 58 per cent job rate was too low.

Mr Mohammad Kader, who graduated from SIM in 2014, said he has not been able to land a full-time job since graduation.

The 26-year-old accountant, who has been in and out of temporary jobs lasting between four months and a year, said: "Companies usually prefer public university students and they are even willing to pay more for them."

SIM graduate Shahirah Khalid said she found a job before graduation. The 25-year-old, who graduated with a Bachelor of Business this year and is working as a forex broker, said: "Some of my friends are starting with a lower pay but that is expected with a private certificate. After a couple of years, the pay will rise according to how well you perform."

Job expert David Leong, who runs PeopleWorldwide Consulting, said the market is tougher now compared with two years ago, and private school graduates may find it even harder to land jobs.

Highlighting the availability of Earn and Learn programmes, he said: "My advice to polytechnic grads who don't get a place in a public university is to work first, instead of going to a private school.

"In a slowdown, employers prefer poly grads instead of those with degrees, especially if the qualifications are from less reputable universities."