Children start tuition young but when they hit their teenage years, extra classes become less important. The nature of tuition also changes over the course of a child's schooling, with group classes the preferred choice when the child is in primary school. When he hits secondary school, one-on-one tuition becomes more common. 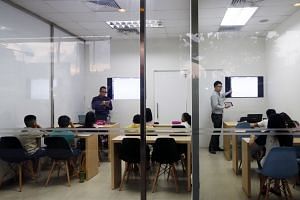 7 in 10 parents send their children for tuition: ST poll

These are some of the findings from a large-scale survey that looked at the growing prevalence of tuition in Singapore.

The door-to-door survey conducted by The Straits Times and research firm Nexus Link polled 501 households with children from preschool to post-secondary levels.

Mr Yee Kian Toung, 45, a tutor of eight years who specialises in mathematics, said tuition is viewed as a must-have at the primary level to help prepare pupils for the Primary School Leaving Examinations (PSLE), which is a "do-or-die exam and a ticket to a good school. Parents will do their best to maximise their kid's potential".

The PSLE is a do-or-die exam and a ticket to a good school. Parents will do their best to maximise their kid's potential. But at the secondary school level, parents are more hands-off.

MR YEE KIAN TOUNG, a private tutor of eight years, on why tuition tends to peak at the primary school level

Mr Yee, a former Ministry of Education teacher, said that at the secondary school level, "parents are more hands-off and tend to react only when the child's grades slip".

She said he spends longer hours in school now and tuition would leave him with less free time. But her daughter needs tuition to help her cope with the upcoming PSLE.

The study also found that parents mainly chose private group tuition, which includes tuition centres, for their primary school children. About 58.9 per cent of parents with such children opted for private group classes, against 34.2 per cent going for individual tuition.

At the secondary level, it appears that those who have tuition preferred one-on-one lessons, at about 43.5 per cent. The percentage of those with private group tuition was lower at 38.9 per cent. Housewife Colleen Teo, 43, said she prefers group tuition for her younger son, who is in Primary 4. Her older son, who is in Primary 6, has individual tuition only because he has Asperger's Syndrome and requires special attention. She said the "interaction with his peers" motivates her younger son, and that a tuition centre has more resources to make lessons interesting.