SINGAPORE - A new initiative to get more Indian children acquainted with their mother tongue at an early age is making rapid progress.

The pre-school Tamil Enrichment Programme launched by the Singapore Indian Development Association (Sinda) on July 1 has enrolled 250 children for the 20-week course.

Sinda is a self-help group set up in 1991 to address educational and socio-economic issues facing the Indian community.

"Because of the diverse social set-up today, English is prevalent in (Indian families') homes, so the exposure to Tamil has dwindled," said Sinda chief executive Anbarasu Rajendran.

"Out of the 250 children, 40 per cent of them do not have any exposure to the Tamil language in their kindergarten or at home, which is to me, is culturally worrying."

Mr Anbarasu said Sinda wants to conduct a study with the course participants to find out the reason for the lack of a home Tamil-speaking environment.

The programme is being conducted at 11 locations - including Sinda and community centres - and there are plans to expand it to more sites. 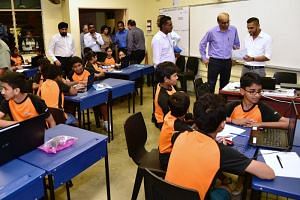 ITE students, alumni share how Sinda programmes have benefited them

It will run every year for children aged five to six. It costs each child $450 but Sinda is heavily subsiding it.

Ms Sree Vithiyah Krishnan, 37, enrolled her five-year-old son Devesh because it would help him become familiar with Tamil before starting primary school.

The family, who speaks mainly English at home, also had difficulty getting Devesh and his older brother to speak Tamil at home.

"They need to enjoy the language (before Primary One), so that they'll understand that it's OK to speak Tamil," said Ms Sree, a customer service executive.

Devesh is certainly keen: "I like the class because it's so nice and the teachers are good."