The scrapping of the aggregate score from the Primary School Leaving Examination (PSLE) was a long time coming, said most parents who are glad that children will no longer be so finely segregated based on a few marks.

They also hope that the move to wider scoring bands in 2021 will cut down on excessive competition among children and parents in the chase for that last mark.

Marketing manager Bernard Ong, 34, who has a four-year-old son, said: "Many parents are so obsessed with the single score a child gets at the PSLE and forget that he or she has other attributes too."

Still, one burning question remains: How will pupils be sorted into secondary schools?

Since they will be graded on wider bands, more are expected to qualify for top schools, which already receive more applications than they have places available. 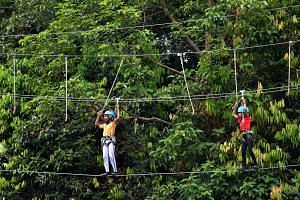 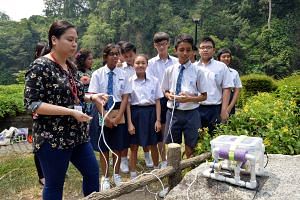 Exploring ways to learn outside the classroom 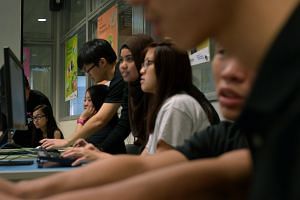 Key players in jobs arena must change mindset too

Applicants are now filtered according to their PSLE scores.

Mrs D. Fong, 40, who works in the finance industry and has a son in Primary 1 and a daughter in Primary 2, said: "How will we know which grades we need for which schools? And if many pupils get four As, how will schools choose?"

There seems to be two possible options. One is a computerised balloting system in which applicants are subject to the luck of the draw.

The other is to give schools the discretion to pick.

This could involve looking at a child's co-curricular activity involvement, volunteer work, leadership roles, character development and other skills and talents beyond academics, such as in the music and the arts.

It may also include an interview.

Parents were split between the two. Part-time piano teacher Joyce Wong, a 41-year-old mother of three children aged five to 13, said balloting will give everyone a fair chance of getting into a school.

"If schools start to look at CCA records or other talents, it will benefit parents who can afford external enrichment classes, which are not cheap," she said.

Besides, there is the Direct School Admission (DSA) scheme which started in 2004 and recognises non-academic talents.

It has led to extra competition to put together a standout portfolio of achievements beyond grades among pupils who hope to join Integrated Programme schools.

These schools let students progress to junior college without sitting the O-level exams.

Ms Denise Phua, chairman of the Government Parliamentary Committee for Education, points out that the DSA scheme needs to be improved further "so that it will not end up favouring those who can afford to be nurtured from young to meet its non-academic eligibility standards".

It should consider the grit and resilience shown by students in overcoming obstacles, as well as those with special needs.

"If there is fear of favouritism as a result of subjectivity, then introduce a small panel as a form of check and balance," she added.

It is used during the Primary 1 registration exercise when there are more applications than vacancies in a school.

But Dr Timothy Chan, director of SIM Global Education's academic division, wonders if parents will be willing to leave a key decision such as secondary school posting to luck.

"Will they accept an outcome based on pure chance?" he asked.

Other parents, such as freelance art instructor Nora Yeo, who has two children aged 10 and 15, prefer secondary schools to be the ones to choose among applicants.

The 39-year-old admits this may lead to more stress.

She said: "Parents are always finding ways to beat the system. They may send their kids for everything to stand a better chance."

Housewife Lydia Tan, 38, who has a six-year-old son, also prefers the schools to choose. "What if my child works really hard and achieves top marks, and yet can't get into his dream school because he wasn't as lucky?" she said.

Acting Education Minister (Schools) Ng Chee Meng has explained that his ministry will spend the next few years developing and testing the secondary school posting system.

More details will be announced in two to three months.

However, students who had taken the PSLE said the move to wider scoring bands is a good thing, especially since future batches will not have to get so worried about a few marks.

Still, Secondary 4 student Ashley Tan, 16, said it would not have changed how hard she studied.

"I wouldn't slack. There's no guarantee that I would get an A."