Children hoping to clinch a place in 19 primary schools next year will face a ballot, following the end of the fourth phase of Primary 1 registration on Tuesday evening.

These schools include Anglo-Chinese School (Junior), which had 65 boys vying for 46 places, Fairfield Methodist School (Primary), with 51 children eyeing 32 spots, and Nan Chiau Primary School, where 70 children applied for 60 seats.

Last year, 27 primary schools had more applicants than vacancies at this stage, and 24 eventually held a ballot.

There are seven phases in the Primary 1 registration exercise.

A total of 83 out of 185 primary schools this year have filled more than half of their Primary 1 places.

Last year, 95 primary schools were more than half-full at this point. 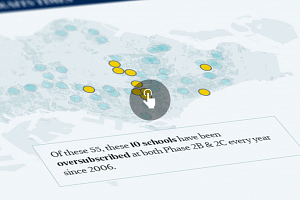 Interactive: A guide to Singapore’s Primary 1 registration for 2020

Phase 2B is for children whose parents have done volunteer work at the schools they want to enrol their children in, have links to churches or clans directly associated with the schools, or are active community leaders.

Parents of children in the ballot for Phase 2B will receive the results through text messages tomorrow after computerised balloting is done centrally by the Ministry of Education.

Phase 2C, for children with no prior connections to their schools of choice, starts next Monday.