Students who sat the International Baccalaureate (IB) diploma exams in Singapore have performed better than their global counterparts.

According to the Switzerland-based IB Organisation that conducts the exams, Singapore produced 38 perfect scorers this year - more than half of the 68 worldwide.

The average score in Singapore was also higher than the global average: 38.49 points against 28.58 points.

There are another 17 institutions in Singapore that offer the IB diploma. Students from those schools sat the first round of exams in May last year. 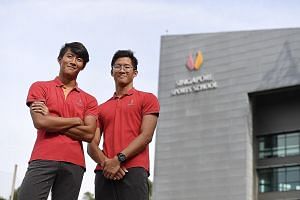 Twins who just made it to Express score high in IB

At Sota, the 146-strong International Baccalaureate Diploma Programme (IBDP) cohort scored 39 points on average, with 72 of them obtaining a score of 40 and above - the school's best performance in the past five years.

Another 14 students from Sota did the IB Career-related Programme (IBCP), which requires students to take up four core subjects, two diploma subjects, and a career-related study.

Globally, 18,387 students took the exams last November and more than 180,000 exam papers were processed in 16 languages.

IB chief assessment officer Paula Wilcock congratulated students on receiving their results. "This day is the culmination of two years' dedication to their studies and is a significant milestone for students all over the globe," she said.

Dr Siva Kumari, IB director-general, added: "Your IB study has given you great breadth and depth of knowledge, the ability to think critically, and the opportunity to flourish intellectually, as well as emotionally, physically and ethically, not just in your next educational step but in life."

The IBDP is a two-year programme conducted at 25 institutions in Singapore. IB qualifications are recognised by universities across the globe.

A version of this article appeared in the print edition of The Straits Times on January 05, 2019, with the headline 'Over half of perfect scorers from S'pore'. Subscribe
Topics:
More
Whatsapp Linkedin FB Messenger Telegram Reddit WeChat Pinterest Print Purchase Article Copy permalink