The Organisation for Economic Cooperation and Development (OECD) is looking at measuring the skills and knowledge of university students across countries.

The exercise will be similar to its Programme for International Student Assessment (Pisa), a global study of 15-year-olds' abilities in maths, science and reading, which Singapore has consistently aced.

Mr Stefan Kapferer, OECD's deputy secretary-general, said yesterday that it wants to do the same in higher education, by measuring institutions' learning outcomes and employability of their graduates.

Parents and students want to know more about what they will gain in skills and knowledge from different universities, he said. 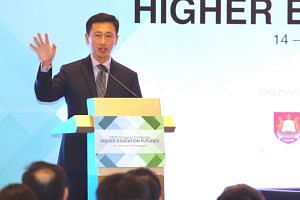 When asked if Singapore would take part in the test, the Ministry of Education said it is "open to learning more about the objectives, scope and methodology of OECD's benchmarking study".

Currently, global university rankings rely heavily on research, but this is only one aspect, and perhaps "not the most important aspect for young students because only a few will go into research", Mr Kapferer said. He added that the test is a chance to compare results across universities, and have more transparency.

However, he said: "This is not only the decision of national governments because universities have a higher degree of autonomy. That means we have to convince also universities to take part."

The OECD did a feasibility study in 2012 to assess the skills of economics and engineering students in 17 countries at the end of their degree courses. They were tested on skills such as reasoning and problem-solving, as well as skills related to their disciplines.

However, many questions were raised about whether a common benchmark would accurately compare systems across countries.

Said Mr Kapferer: "At the beginning, there is a lot of resistance and reluctance, and people do not really know if it is effective."

But the OECD is "still convinced, like we were with Pisa surveys... that measuring outcomes is a very relevant aspect", he said, adding that its work in policy recommendations is based on evidence.

He said "five or six" countries had expressed interest in taking part in the study, which will start "relatively soon". He noted that countries with low-profile universities are "often more interested in a new kind of measurement because for them, it's an opportunity".

"Countries where you have universities with a high grade of reputation, they have a lot to lose, so they are maybe not so interested."