The National University of Singapore (NUS) may have gone down by just one spot but, in the process, it has been knocked off its perch as Asia's top university by China's Tsinghua University in the latest Times Higher Education World University Rankings.

In the rankings released last night, NUS slipped to No. 23, while Tsinghua University climbed eight places to No. 22.

Last year, NUS tied for 22nd place with the University of Toronto in the annual list, and was ranked as the top Asian university for the third year running. It was also the only one from Asia in the world's top 25 universities list.

Nanyang Technological University (NTU) moved from the 52nd position to 51st this year.

Times Higher Education magazine, which unveiled its latest rankings last night at the World Academic Summit in Singapore, said Tsinghua's rise is driven largely by improvements in its teaching environment, while Peking's decline is largely due to increasing competition and a drop in research income.

Mr Phil Baty, editorial director of the Times ranking, said that NUS remains "one of the most innovative and dynamic universities in the world". He added: "NUS has outstanding scores across all of Times Higher Education's core metrics, but it has one of the highest scores of all universities in the elite world top 30 for international outlook, demonstrating that NUS is a magnet for global talent, and a highly sought-after research partner for universities across the world."

But he noted that the new rankings show strong competition from China.

Seven Chinese universities feature in the top 200 this year, with several moving up in the rankings.

He said China has positioned its universities at the heart of its national economic growth strategy. 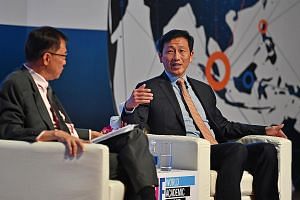 In contrast, traditional power regions such as America, Europe and Australia are experiencing the effects of deepening cuts and creeping isolationism.

NUS president Tan Eng Chye said he was pleased that NUS continues to be recognised among leading universities in the world and in Asia.

"The nature of work is changing rapidly, and universities will need to innovate and evolve to effectively respond to the Fourth Industrial Revolution," he said.

An NTU spokesman said the university was making steady progress. It has improved on the overall score from last year and ranks as the top university in Singapore for citations and industry income.

The Times ranking - now in its 15th year - lists more than 1,250 higher education institutions from 86 countries this year.

It uses 13 indicators - including research, knowledge transfer to industry and international outlook - to assess a university.

Oxford University claimed the first position for the third consecutive year, while Cambridge retained its second position, and Stanford in the United States held steady in third place.