They are 11th in the world in QS' annual global rankings, while SMU climbs up to 477th place

Nanyang Technological University (NTU) has joined the National University of Singapore (NUS) in the top spot in Asia in an annual global ranking of universities that is read by educational institutions and governments.

In the Quacquarelli Symonds (QS) World University Rankings released this morning, NTU rose by one position and NUS retained its rank from last year, to share the top spot in Asia and 11th place in the world.

The top three institutions worldwide on the list, which is in its 16th edition, are all from the United States: Massachusetts Institute of Technology, Stanford University and Harvard University. 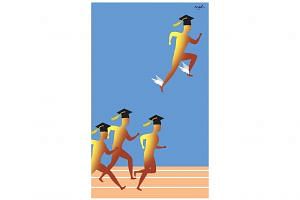 But NUS is more well-known among academics and employers than NTU, staying at 11th in the world for academic reputation with a score of 99.8, based on responses from over 94,000 academics.

With a score of 99.2, NUS also moved up four places to 14th for employer reputation, which is based on feedback from more than 44,000 employers about the quality of an institution's graduates.

NUS, NTU and SMU scored full marks for international faculty ratio, which measures the proportion of non-local faculty at an institution.

But compared with global faculty count, they received lower scores for international student ratio, which looks at the proportion of foreign students at an institution and provides an indicator of its ability to attract global talent.

NTU and NUS said the QS rankings show their efforts in research and education are being recognised. NUS and NTU have some 39,000 and 32,000 students respectively. An NTU spokesman said that along with the appointment of Professor Subra Suresh as president in January last year, the new leadership team has overseen the hiring of top talent in the past 1½ years.

It also set up in March the NTU Institute of Science and Technology for Humanity to study the impact of technology on society.

An NUS spokesman said: "We are honoured that many academics and employers around the world continue to regard NUS as among the best in Asia and globally... The remarkable global standing of our local universities attests to the quality of Singapore's higher education system."