Though Hwa Chong Institution (HCI) teachers can use a professional development fund set up by their school to pay for their parking charges, such in-kind benefits are still part of their remuneration package and subject to income tax, said the Ministry of Education (MOE).

"There is no absorption or subsidisation of parking charges by HCI on behalf of its staff," an MOE spokesman said yesterday.

The ministry's statement comes after HCI's parent company, Singapore Chinese High School, told The Straits Times it had worked out a way to implement the school parking policy for its teachers after a meeting with the MOE to clarify how the measure would apply to it.

Unlike government and government-aided schools, which will deduct parking charges directly from teachers' salaries, independent schools like HCI can decide how such fees are collected. HCI is one of the few schools in Singapore that owns the land it sits on.

After a two-hour meeting with MOE on Wednesday, HCI agreed to deduct the fees from the teachers' individual accounts in a fund that HCI - which has both a secondary and junior college section - has established for their professional development.

The fund, which starts from $800 annually for teachers who have served for at least a year, is part of their flexi-benefit accounts in their remuneration packages.

It can only be tapped for uses such as professional courses and items like books or laptops.

A remuneration package typically includes take-home pay, bonuses and benefits or rewards, such as reimbursements for medical or learning and development fees. 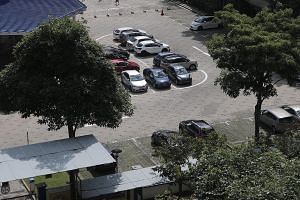 Teachers to pay for parking in schools from August

Mr Robson Lee, chairman of the Singapore Chinese High School's board of directors, said flexi-benefit accounts for staff have been in place since 2006. "A teacher who drives will have his or her parking charges set off against the amount of benefit that he or she would otherwise receive from the scheme," said Mr Lee. "There is thus no subsidy from the school."

Announced last month, the school parking policy was imposed after an Auditor-General's Office (AGO) report had faulted some educational institutions for allowing their staff to park for free or charging fees below the market rate. Such practices "are tantamount to providing hidden subsidies for vehicle parking", the AGO had said.

The policy will kick in this August. Teachers have to pay $75 a month for outdoor parking during the term, and $15 a month during school holidays. They pay $100 and $20 at sheltered carparks during the respective periods.

After the meeting with MOE, it was made clear that staff at private institutions like HCI's international school and its alumni association will not pay parking fees.

Like many independent schools, HCI hires most of its own teachers instead of getting them from MOE. However, all its teachers - including direct hires-will have to pay for parking as their salaries are paid for with MOE funds.