For years, 68-year-old Ng Beng Tiaw has been the main caregiver to her granddaughter, who has special needs.

When she is not looking after the teen, the retiree is kept busy doing housework for her family, who include her husband, an adult son and another grandchild.

Lee Xin Hui, 15, has global developmental delay (GDD), which slows down her development in physical, cognitive, emotional and social skills.

But since February, Xin Hui has been spending time at a new after-school care centre for children with special needs, sited in Minds Woodlands Gardens School.

For Madam Ng, it means she can take a break in the afternoon before going out to pick up her grandchild.

Xin Hui is one of 23 students attending the centre run by the Movement for the Intellectually Disabled of Singapore (Minds). Minds Raintree was officially opened yesterday, though it began operations on Jan 2.

Besides providing before-and-after school care for special needs children aged seven to 18, Minds Raintree tailors learning programmes for them. These range from cooking to critical thinking. 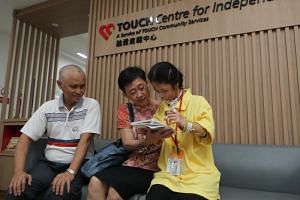 It is Minds' first such student care centre for special needs children and youth.

Madam Ng became the main caregiver for Xin Hui and her 14-year-old sister after their parents divorced about a decade ago. Xin Hui's father - Madam Ng's son - died last year.

Madam Ng recalled: "She used to cry every morning and refuse to get out of bed. She would also be uncomfortable in crowded places such as foodcourts.

"Since attending the centre, she is happier and more confident."

Programmes at the centre have helped her socialise and develop confidence, said Madam Ng.

The teen attends Minds Woodlands Gardens School in the morning, and then Minds Raintree until 5.30pm.

"Now I have at least four hours every day to rest and read my magazines," said Madam Ng.

Fees at Minds Raintree are $832 every month but Madam Ng said Xin Hui gets a 70 per cent subsidy.

The centre has been a godsend for Ms Ruhama Halimi as well. She is the main caregiver for her 12-year-old son, who also has GDD.

"It's really not easy and it can be especially stressful for a single mother," said the 47-year-old school librarian, who also has a 14-year-old daughter.

But after her son Iqbal Syabil, a pupil at Minds Woodlands Gardens School, started attending the care centre in February, Ms Ruhama has had more time to rest and focus on her work.

Said Ms Koh: "The idea of opening a special student care centre was mooted years ago as we noticed that there were a lot of caregivers in Minds who have no additional caregiver support, and had to give up their jobs with regular work schedules to care for their children with special needs."

Minds Raintree is the sixth care centre in Singapore for children with special needs.

Other care centres for such children include the Association For Persons with Special Needs Student Care Centre in Ang Mo Kio.