SINGAPORE - Most needy students in universities and polytechnics will see a big portion of their tuition fees slashed, with bursary amounts set to go up next year.

Once the higher bursary kicks in, polytechnic students who come from the lowest 20 per cent of household income groups will pay no more than $150 of the $2,900 annual fees - $400 less than what they now pay each year. All in, 33,000 polytechnic students are expected to benefit for the bursaries.

Government bursaries for new and existing medical and dentistry undergraduates will also be increased, with the 20 per cent least well-off students having to pay only $5,000 a year - compared with the full fees of $28,900 at the National University of Singapore and $34,700 at the Nanyang Technological University (NTU).

All in, some 21,000 undergraduates, including those from medicine, are expected to benefit from the bursaries.

The government spending on bursaries for undergraduates and diploma students will increase by $44 million in total - from $123 million to $167 million.

Education Minister Ong Ye Kung, who shared details of the increased bursary quantums on Thursday (Aug 22), following the announcement by Prime Minister Lee Hsien Loong on Sunday, said there is a need to boost the bursary amounts as more students from lower-income households are making it to polytechnics and universities. 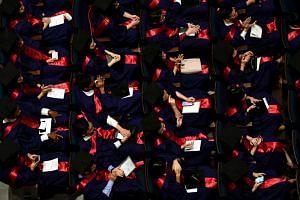 For the universities, the proportion has gone up from 13 per cent to 21 per cent.

Noting that subsidies for higher education fees are already significant - averaging as much as 75 per cent for all university students - Mr Ong said there is a need to do more as the cohort participation rate for universities has gone up over the last 15 years. Along with this, he said "more students from more humble backgrounds are making it to AUs (autonomous universities) and polytechnics, and they need more help from us".

He also said that universities have an important role in social integration and in enabling social mobility.

Singaporeans from all walks of life come together at polytechnics and universities, he pointed out. “It’s one big melting pot.”

Education was also an upgrading force, with each generation doing better than the previous one. “It is fundamental to our social mobility,” he said.

Bursaries had to be increased to help lower-income groups gain from education. “Cost cannot be an impediment for families with hard work and talent and aptitude to upgrade their lives and get a better future for themselves,” said Mr Ong.

Grab driver Mr V. Perumal, 54, whose youngest son got into university to study engineering, said he is heartened by the bursary increase.

“Both my wife and I were so happy when our son told us he got into NTU to study engineering. But at the same time, we have been having sleepless nights worrying about the fees.

“I have been looking at how we can borrow some money. But now, we are very relieved.”