Demand for places up, with many not able to afford costly fees of international schools

Permanent residents (PRs) Sumalatha Videm and her husband Videm Nagender, who works in the IT sector here, have been living in Singapore with their daughter Videm Sree Vainavi for nearly seven years.

Now the family, whose income is about $6,000 each month, is thinking of leaving as the $1,100 they pay a month for Videm, who is on a long-term visit pass, to attend Global Indian International School is fairly costly. Last year, when Videm, seven, was ready for Primary 1, the family from India applied for a place at Marymount Convent School near their Toa Payoh home. They failed to secure a spot.

"We were willing to travel to any other school, even if it was in Jurong or Woodlands, but we were told 'no'," said the 33-year-old who works in the property industry.

"I understand if schools have no vacancies for foreigners. But it would have been better if they stated the criteria more clearly," she said.

A survey in September last year by an online support group for expats here found that about 34 per cent - 86 out of 250 pupils - were able to secure Primary 1 places in local schools last year. School placement agents, which help foreign children enrol in local and international schools, said the overall situation is more difficult. There have been more requests for local school places, but fewer successes.

She is one of a growing number of PRs and foreigners who are finding it tougher to find places in local schools for their children - even as cohort sizes for Singaporean school-goers shrink due to the falling birth rate.

A survey in September last year by an online support group for expats here found that about 34 per cent - 86 out of 250 pupils - were able to secure Primary 1 places in local schools last year. School placement agents, which help foreign children enrol in local and international schools, said the overall situation is more difficult. There have been more requests for local school places, but fewer successes. 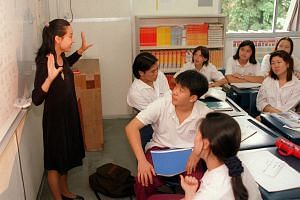 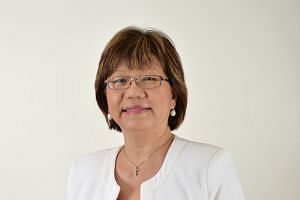 ITS Educational Services said it received nearly 100 inquiries last year about getting into local schools, up from 70 in 2014 and 30 in 2013. But of last year's 100 cases, only two were successful.

On online expat forums, such parents are now wondering if there have been further restrictions on numbers of foreign students in local schools, even as the size of the expatriate population grows.

The Education Ministry (MOE) said it receives 3,000 to 3,500 applications from foreign students yearly to join local schools, but declined to say how many succeed. It said the proportions of international and PR students in local schools have remained fairly constant in recent years, at 4 and 9 per cent respectively.

A ministry spokesman said it values the diversity that foreign students bring, but the needs of Singaporeans have to be met first.

She also highlighted that the number of available vacancies at schools and the need to ensure "a good spread of students" are considered when allocating places to foreign students, adding that MOE "may not always be able to meet the demand from international students entirely".

The Sunday Times understands that some schools, such as Balestier Hill Primary and Opera Estate Primary, tend to have a larger number of international pupils as these are not very popular with locals.

The Admissions Exercise for International Students (AEIS), which assesses English literacy, numeracy and reasoning abilities and was introduced in 2008, has also been compulsory since late last year for international students applying for education in local schools, The Sunday Times has found out.

Before, foreign students who wanted to join Primary 2 to 5 and Secondary 1 to 3 could directly approach schools, which could hold their own placement tests. But now, all such students, including those on dependant passes (DP), must take the AEIS and schools direct all requests for places to MOE. Primary 1 applications for foreigners are in the last phase of the annual registration exercise, after Singaporeans and PRs have secured their places.

The AEIS ensures that foreign students "admitted to our mainstream schools have the required academic standard to be able to adjust to the rigours of the Singapore curriculum", said the MOE spokesman, adding that it streamlines the process by having one common, centralised test.

Applicants who pass and meet the age criteria "will be offered a place in a suitable school", based on availability, test performance and where they live here.

When asked how many passed the AEIS, MOE said numbers vary depending on the quality of applicants.

Dr Yvonne McNulty, associate lecturer at RMIT University Singapore, said the demand for local schools from foreigners has grown as more of them do not receive salary packages that cover housing and children's school fees.

Dr McNulty, who specialises in expatriation and global mobility research and is the founder of Expat Research, said: "They cannot afford the international school fees... if they have two to three children."

There are about 30 international schools here, whose yearly fees can amount to as much as $40,000.

Based on research and interviews, Dr McNulty estimated two in three foreign students were unable to get into local schools last year. She also explained that in some cases, parents are told by recruiters they can approach schools here directly for a place for their children.

Dr McNulty said: "Many expats tell me that local education is presented as a choice before they come here. When they arrive, they realise it's misleading. It would be good if the MOE could share the number of applications and places so that people know their chances.

"Their objective is not to steal school places from locals. They just want to have more accurate information so that they can make better decisions."

A version of this article appeared in the print edition of The Sunday Times on March 13, 2016, with the headline 'More expats find it tough to get kids into local schools'. Subscribe
Topics:
More
Whatsapp Linkedin FB Messenger Telegram Reddit WeChat Pinterest Print Purchase Article Copy permalink