SINGAPORE - Of the 191 primary schools in Singapore last year, three-quarters had women principals, going by the latest data from the Ministry of Education.

Women also outnumber men among the 15,000 primary school teachers - more than eight out of 10 are women.

But for boys, affirmation from male teachers can have more impact, said Mr Sekaran Chinna Govanden.

"Especially in PE... if a teacher tells a boy he can dribble well, he can shoot well, he's fit, it's a boost in self-esteem and confidence for him," said the head of department for physical education and co-curricular activities at Opera Estate Primary School.

Male teachers can also be role models for young boys and girls, he said.

Mr Omar Azahari Mohammed Ali, discipline master of Opera Estate Primary School, said: "Kids see you as a father figure... and a role model, in the way you dress, talk to them."

The mathematics and science teacher added: "In the past, male teachers were typically seen as disciplinarians, but increasingly, they can be firm and nurturing at the same time.

"I know some boys like football, so I use that as a starting point for conversations to relate to them. Once they trust you, they will listen and follow you." 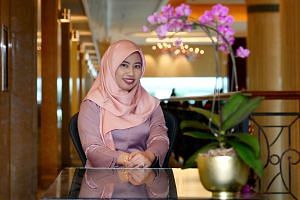 Three out of four primary school principals are women

Mr Omar and Mr Sekaran are among 18 male teachers in their school, which has a total of nearly 70 teachers.

They believe that it is a matter of time before more men join primary schools.

"There is a cultural shift - fathers today are more involved in the early years of childhood, from diaper changing to baby-carrying. We see many of them come with their children on the first day of school too," said Mr Sekaran.

"There is a blurring of expected societal norms, and similarly, it will take another generation to change the stereotypes that teaching in primary school is for women."