Parents whose children take Malay in school will be able to read with them using books from the Nabil Nabilah Reader Series from as early as when they are in kindergarten, up till the end of their primary school years.

The extension to the series to promote Malay reading - which currently comprises books for Primary 1 to 4 pupils - was announced yesterday by the chairman of the Malay Language Learning and Promotion Committee and Senior Parliamentary Secretary for Education, Associate Professor Muhammad Faishal Ibrahim. He was at a workshop for parents in Punggol View Primary School.

He noted that the series, which features a pair of fictional siblings - brother Nabil and sister Nabilah - through stories set in Singapore, has gained traction among pupils, parents and teachers.

Referring to the series, he said afterwards to reporters: "It has become a platform for us to inculcate the reading habits among our children. At the same time, It opens up many more opportunities to talk about issues and things that are relevant to the lives of our children in Singapore… It looks at it from the perspective of Malay language and mother tongue. That is very important for us."

He said the learning of the mother tongue was becoming more challenging with the widespread use of English, and "going upstream" to Kindergarten 1 and 2 with the reader series would expose children to the mother tongue at an early age.

Each of the 175 primary schools has five sets of the books, with PDF versions available to the public on the Malay Language Learning and Promotion Committee website. 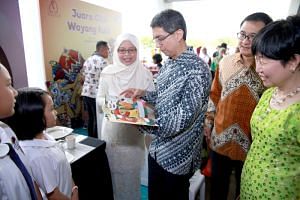 Mr Mus Iskandar Abdul Motalib, 40, who attended the workshop with his daughter Maisarah Rifqah, aged eight and a Primary 3 pupil at Punggol View Primary, said he and his wife read books from the Nabil Nabilah Reader Series with his daughter on weekends.

Said the assistant engineer: "The stories are more engaging; they have the Singapore context. As a family unit, we can relate to the stories."

Mr Mus Iskandar said that with the books for younger children, it meant that he would be able to read them with his younger child, now aged four months, when he goes to kindergarten.

•The PDF versions of the books can be accessed at https://www.mllpc.sg