The move to site the Singapore Institute of Technology (SIT) in Punggol was a natural one, as the estate is one of the few left in Singapore with enough space to accommodate it, experts said.

They added that infrastructural developments in the pipeline will also be more than adequate to cater to the influx of students commuting in and out of the area when the campus is completed.

The decision to locate a centralised campus for SIT in Punggol was announced on Sunday by Prime Minister Lee Hsien Loong in his National Day Rally speech.

PM Lee did not reveal when the campus will be ready or when construction will begin, but the Singapore University for Technology and Design's campus, which opened in May, took about four years to build. Punggol residents will get to use SIT's facilities, including classrooms, workshops and a multi-purpose hall.

At the moment, the university is housed in a main campus in Dover Road and five satellite campuses across the island.

Experts told The Straits Times that locating the centralised campus in Punggol was a sensible move.

Transport expert Park Byung Joon noted that the campus will be quite big and it will be linked to a forthcoming creative industry cluster around it. "We need a huge space, and I think Punggol is the only space left for such a purpose," he said.

Addressing concerns about whether transport infrastructure will be equal to the task of moving thousands of students, Dr Park said that he is sure the Government will build new roads and provide more bus services.

There are plans to expand Punggol bus interchange, he noted.

Professor Lee added that he is glad the Government will provide other amenities in Punggol.

But NUS geographer Lily Kong said the influx of students will increase the pressure on other facilities. "There will also be spillover into the surrounding area beyond the campus itself, in terms of food and beverage and other retail, as well as recreational needs," she said.

Businesses and residents feel that SIT will invigorate the area, which is almost deserted during the day.

"On the weekdays right now, there is not much business," said Mr Ravi Anchan, general manager of Indian restaurant Curry Gardenn near Punggol Jetty.

Property agent Edwin Lim, 43, is looking forward to moving into a flat in Sumang Link, near the planned campus.

He remarked: "If my son wants to go to university, this will be very near for him."

Transport consultant Gopinath Menon added that the new campus is a chance to test bicycle-friendly infrastructure.

SIT president Tan Thiam Soon said that the "smart and green campus" will be consistent with Punggol becoming the first eco-town in Singapore.

He added that the campus would feature "tinker spaces and maker spaces" - where students and faculty can test new technologies alongside industry players. 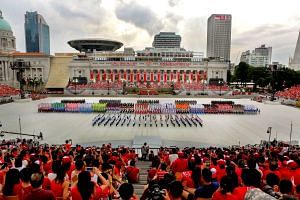 "We will ensure that the relationship with industry is symbiotic, such that both students as well as the industries benefit," he said.

Second-year SIT engineering student Tengku Muhammad Khalaf, 26, will probably not get to study at the new campus, but he feels that the changes will greatly benefit his juniors.

"Right now, if we have laboratory sessions, we may have to go to another satellite campus. If everything is in one campus, it'll be a better university experience," he said.