At Chiltern House, every class has its own room and there is an indoor playground, which may not be the case at most pre-schools.

When ST visited its Nursery 2 (N2) class recently, no noise from outside could be heard.

Said principal Iris Lim: "We allow the kids to speak up and express themselves. If the centre had an open concept, it'd be difficult to focus on what the children are talking about." 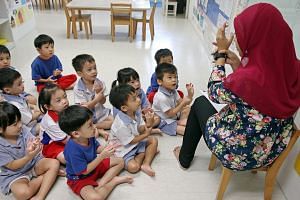 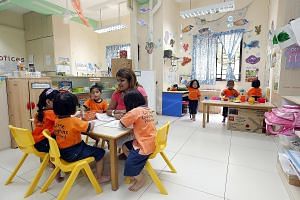 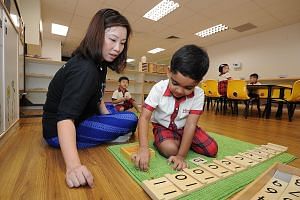 Teaching how to focus and tune out distractions at Brighton Montessori

Its N2 class was exceptionally small - there were just six children with two teachers in class.

The pre-school sets a ratio of one teacher to seven children, and there are 14 places for the N2 full-day programme, but only seven are filled. One was absent when I visited.

The pre-school is in an exclusive club - only around 1 per cent of centres here charge more than $2,000 a month. Most pupils at the pre-school, which is on the second floor of the SLF Building in Thomson Road, are from the nearby Newton or Thomson areas.

The Chinese teachers, mostly from China, have lived here for several years so their mainland accent is not too strong.

Ms Lim said there is much communication between parents and teachers. "The teachers talk to the parents, sometimes every day, so there's rapport built."

The pre-school is under the Julia Gabriel Education group and named after Chiltern, in south central England, where Ms Gabriel's parents' home is.

Visiting specialist teachers from Julia Gabriel Centre conduct speech and drama and music sessions once a week with each class.

It values children's learning of Mandarin too. For the full-day programme, children spend half the day with English-language teachers, and the other half with Chinese-language ones.

Said Ms Lim: "If children can choose to go to either the English or Mandarin teacher, they often end up going to the English teacher."

There were two Chinese teachers in the N2 class when ST sat in.

As the theme that week was pastries, pupils learnt words such as "biscuit" and "jam". They also read stories, did art and craft, and learnt about patterns when making a necklace with beads - all in Mandarin.

Teachers and children spoke to one another in Mandarin in every instance, even when talking about going to the toilet.

Said Ms Lim: "In a way, the children are 'forced' to use the language, so it becomes more effective for the children to learn Mandarin."

A version of this article appeared in the print edition of The Straits Times on May 02, 2016, with the headline 'Language immersion at Chiltern House'. Subscribe
Topics:
More
Whatsapp Linkedin FB Messenger Telegram Reddit WeChat Pinterest Print Purchase Article Copy permalink