In the third of a five-part series, we look at the role of play in a child's development.

Everyone knows the proverb "All work and no play makes Jack a dull boy" but Dr Stuart Brown, founder of the National Institute for Play in California, argues that play deprivation could turn Jack into a depressed, even dangerous boy.

"Play is a biological drive as integral to our health as sleep or nutrition and when we are deprived of it, we suffer," declares the psychiatrist. 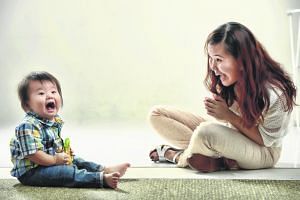 He became interested in the power of play when he was appointed to a commission to examine the background of mass murderer Charles Whitman in the 1960s.

It was then the largest mass murder in American history. The 25-year-old engineering student and former US Marine shot dead 17 people at the University of Texas in Austin in August 1966, having first killed his wife and mother.

A team of scientists including Dr Brown scrutinised every detail of the Texan's life to understand why a seemingly normal person - a former altar boy and boy scout who had no criminal record and had never shown a tendency for violence - would go berserk.

Dr Brown, who is one of three speakers at The Straits Times Education Forum on June 27, told The Sunday Times from his office in California about the surprising conclusion the commission arrived at.

"Even though they came at the problem from different disciplines, in the end one of the things that stood out was play deprivation," he said. Whitman had been raised in a tyrannical, abusive household and, from birth through age 18, his natural playfulness was systematically and dramatically suppressed by an overbearing father.

"He was bright and verbal, but he had never developed the ordinary skills of give-and-take. His childhood left him unprepared to cope with stress, and eventually he exploded."

If someone hits them too hard, they know what that feels like. So they are not going to hit somebody else too hard. And that's the root, for example, of an empathic response.
- Stuart Brown

The Whitman case led Dr Brown to do more research on imprisoned convicted killers, matching them with a comparative group on the outside with similar life stories, but who had not been involved in crime. He found a stark difference between the two groups, as far as play was concerned.

He said of the murderers: "Every single one of them lacked typical play experiences. The absence of play appeared to have a very significant effect, particularly on socialisation and handling of aggression.

"They especially had trouble with the most ordinary play boys engage in - rough-and-tumble. Boys learn how to give and take when they play rough.

"You might say that rough-housing grants them a kind of grace; it's a way of making friends and deepening friendships. These murderers had never experienced that type of play, and they missed the learning that came from it."

Explaining how rough-and-tumble play can build empathy and the attitude of give and take, he goes on: "You watch kids at play. It may be chaotic, anarchic, even a little violent. They are diving, hitting and screaming. But the kids are also learning from play. If someone hits them too hard, they know what that feels like. So they are not going to hit somebody else too hard. And that's the root, for example, of an empathic response."

He thinks mums and dads should stop "helicopter parenting" at the playground and allow for more free play.

"Whether it's playing hide and seek or deciding to build a sandcastle together, parents have to allow the kids themselves to negotiate the rules, who wins and loses. The brain builds new circuits in the prefrontal cortex to help it navigate these complex social interactions," he says.

Dr Brown maintains that even a lesser degree of play deprivation can have an impact and it shows up in different ways in children.

"They are not as curious, they lack resilience. They have difficulty regulating appropriate emotions," he says. "People who are play deprived also tend to be inflexible, especially when something surprising happens. Novelty is unpleasant when you are unprepared for it or when you are missing the spontaneity that helps you enjoy or learn from surprises. They tend to be rigid and easily startled and will react with hostility or withdrawal rather than joy."

He says scientists are examining play more closely than ever and it has enriched the understanding of play, but much of what is known comes from observing animal species that engage in social play.

For a long time, researchers thought play was the way for young animals to develop skills like hunting or fighting but later research suggests that the function of play is to build pro-social brains, that help individuals know how to interact with others in positive ways.

Play scientists, including Dr Brown who studied animals in the wild, say much of the research can be applied to humans. Both animals and children abide by similar rules that require participants to take turns, play fair and not inflict pain. Play seems to have the function of helping both people and animals become more adept socially.

But what constitutes play? Does only rough-and-tumble play qualify as play?

"No," says Dr Brown, who despite being in his 80s, takes time to play tennis, go on hikes and read in the tree house in his home.

"Many activities qualify as play. As long it's voluntary, done for its own sake and gives pleasure. Often, it engages a person deeply and the engagement itself is more important than the outcome. So one has a sense of being lost outside of time," he says.

He adds: "It must be an activity that can be interrupted; it's not driven; it's not compulsive and it is not done to please others but to please yourself."

Sport may, or may not, count as play.

What about video games? He says: "I'm not against video games - they're certainly better for you than passive television watching. They are more social than we think - kids often get together to play them - and many of the newer types depend on players interacting with each other online. Plus a lot of the new video games require you to get up and move around."

But he is quick to add that it stops being play when it becomes addictive and compulsive.

"Basically we play because we want to and because we like how we feel when we are playing. But when the games take over, when they are so compelling we can't stop, that's a destructive, addictive thing.

"When we have no choice about playing or no freedom to refuse play - as in the case of compulsive gambling or obsessive involvement with electronic games - that is a compulsion and no longer really voluntary. So those who have become addicted aren't playing any more, strictly speaking, because it is no longer voluntary."

He mentions research in brain science which shows that three-dimensional movement in space turns on associational circuits in the brain more than screen space does, particularly in young children.

"With refined imaging techniques, we see that there are connections between the cerebellum and the prefrontal cortex that get lit up by three-dimensional movement. And there's evidence that movement accelerates learning," he says.

He also advocates play for adults.

"Our society tends to dismiss play for adults. The notion is that once we reach adulthood, it's time to get serious. But play is just as important for adults as it is for kids. Play brings joy. We don't lose the need for novelty and pleasure as we grow up."

Play benefits adults in concrete ways, helping them socialise and keep their mind sharp. It is important for marriages too.

"The couples who sustain a sense of mutual playfulness with each other tend to work out the wrinkles in their relationships much better," he says.

Not taking time to play has consequences for adults as well.

"You begin to see that their perseverance and joy in work are lessened."

In other words, all work and no play makes boys, girls and adults a whole lot duller.