SINGAPORE - Yet another international school - Dulwich College in Bukit Batok - has sent out a letter informing parents of an incident in which one of its students was approached by a stranger offering a lift.

In the letter sent on Thursday (Jan 18) morning, Dulwich headmaster Nick Magnus said a senior school student heading home from school was approached in the vicinity of Farrer Road. This happened in December.

The student, understood to be a boy, declined the offer and continued on his journey home, arriving safely.

"As a college we continue to remain vigilant. All of our students have been spoken to in an age-appropriate manner regarding 'stranger-danger'.

"This has been reinforced with our security team, " he told parents in the letter.

The boy is understood to have come forward after learning that two  international students had been offered lifts by strangers in vans, leading their schools to send out alerts.

Mr Magnus declined to say if the stranger who approached the student was driving a van.

When asked if the boy will be making a police report on the incident, Mr Magnus said the school will leave it to the parents to decide.

The Dulwich case is the third reported case.

Two other similar cases were reported by The Straits Times on Wednesday.

Although police have said two incidents of students allegedly being lured into vehicles were not cases of attempted kidnapping but instances of drivers trying to be helpful by offering a lift, students and parents are not taking any chances. 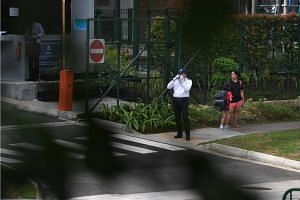 Students, parents not taking chances even though driver in international school kidnap scare had no ill intent

Many international students told The Straits Times that the van driver in the case should have been more aware that his actions were alarming. Parents said they would still be cautious.

In one case on Jan 11, a United World College (UWC) South-east Asia Dover campus middle-school student, who would have been between 11 and 14 years old, was waiting for the bus in Dover Road when a man driving a van asked her to get into the vehicle.

She walked away and later filed a police report with her parents.

It is understood that the driver told the police that he had offered to give the student a lift because it was raining.

The second incident involved a female student from Tanglin Trust School in Portsdown Road. She was walking to school on Tuesday (Jan 16) at 12.30pm from one-north MRT station when she was approached by two people in a white van - said to be driven by a woman - who asked her to get in.

The two schools along with several other international schools and Fairfield Methodist Primary School, which is in Dover Road, have sent letters to parents urging them to be vigilant.