In a statement yesterday, SkillsFuture Singapore (SSG) said the training provider's accreditation as an approved training organisation (ATO) will be revoked.

In response to queries from The Straits Times, SSG said that the revocation of Kaplan Professional's ATO status means it will not be automatically reinstated after the suspension period.

"They may choose to reapply for ATO status after the suspension period of 12 months, upon which SSG will assess if Kaplan Professional has sufficiently addressed all performance gaps identified when evaluating their application," it said.

The Straits Times understands that Kaplan Professional will not be required to return any funding previously received from SSG, and that certificates awarded before the suspension period will remain valid.

Last year, approximately 5,000 students were trained under the WSQ programme in Kaplan, The Straits Times understands.

The training provider - a division of private school Kaplan Singapore - had earlier been told to stop offering some of its Leadership and People Management (LPM) WSQ courses from Dec 1 last year, after some trainers were found to have flouted SSG's guidelines on assessment practices.

Associate Professor Rhys Johnson, chief operating officer and provost of Kaplan Singapore, told The Straits Times in December last year that students had been given the same assessment questions used in prior group discussions for their tests. 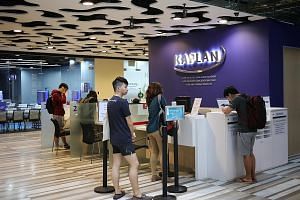 There had also been cases of trainers directing trainees to assessment answers that could be found in their learning materials.

Prof Johnson said that after an internal investigation, a few trainers had been deregistered and were no longer allowed to conduct courses with Kaplan Professional.

The training provider had been offering LPM WSQ courses since 2013.

It has since put in extra measures such as having more unannounced classroom visits by staff, where the conduct of the training and the assessments are monitored, it said.

Yesterday, SSG said it conducted further investigations and audit checks into Kaplan Professional's delivery of other WSQ courses in March.

"In view of the serious lapses by Kaplan Professional, SSG has decided to suspend its approved training organisation status," it said.

No further details were given about the nature of the lapses.

Prof Johnson told The Straits Times yesterday: "All other courses will operate as per normal and will continue to be taught to the stringent standards Kaplan and its partners expect."

An external trainer who teaches an LPM WSQ course said it was a pity to "pull the plug" on this programme. "It is open to people who may not have secondary school qualifications. It lets them obtain a diploma and is very motivating for them. It gives them a place to socialise and network."

Between 2008 and 2017, the Kaplan Learning Institute, which houses Kaplan Professional, awarded more than 225,000 professional certificates.

SSG said Kaplan Professional should continue teaching participants who are enrolled in WSQ courses that will be completed by June 30.

Those enrolled in courses that are scheduled to begin after June 30 will be placed with other WSQ-approved training providers.

In the statement, SSG also said it takes a serious view of individuals, training providers or organisations that do not adhere to its guidelines, and will not hesitate to take action against them.