The Primary School Leaving Examination (PSLE) may be useful as a checkpoint to see how far pupils have progressed in their learning by 12 years of age.

There is also merit in having children prepare for such an exam as they learn values such as resilience, discipline and hard work, said panellists at a round-table discussion organised by The Straits Times and presented by Singapore bank UOB last week.

But they took issue with how the PSLE is currently used for streaming children into secondary schools and different academic streams.

This sorting mechanism, they said, leads to unnecessary pressure on pupils in a system where parents and educators will by all means help them score the best they can - making the PSLE a high-stakes exam.

The round-table session titled "How much does PSLE matter?" explored the importance of academic results and whether it is still a relevant measure of children's intelligence. 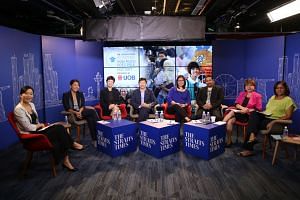 What the experts say

One of the seven panellists, Ms Genevieve Chye, divisional director of the engagement and research division at the Ministry of Education (MOE), said the system is "set up so that our children will be able to see where they're at at the end of six years of education".

"I know we seem to think that it is the be-all and end-all at the end of Primary 6, but really there are so many more pathways available for our children these days which we never had years ago."

But managing director of education firm Nurture Craft Henry Toi said parents treat the PSLE like a "lottery", thinking "if you get a good score, you're kind of set for life".

Ms Denise Phua, a Member of Parliament for Jalan Besar GRC who heads the Government Parliamentary Committee for Education, agreed, saying that the PSLE has become "a monster" that even MOE cannot manage at times.

She noted the efforts that MOE has made to reduce the over-emphasis on academic results, but said "society has been too conditioned (to) not see the PSLE as a high-stakes exam, and families or even some educators may not be able to see any alternative, except to make sure that people do well in this exam".

Ms Sandra Davie, The Straits Times' senior education correspondent, called for a relook of the PSLE and asked if it is doing more harm than good.

Singapore is one of the few countries to have a high-stakes examination for 12-year-olds, she said, adding that places like Hong Kong that used to have a similar sorting exam did away with it a few years ago.

Ms Phua suggested piloting an alternative system, or a 10-year through-train from primary to secondary school, to allow students to have a more "enriching" education beyond just preparing to be tested at 12 years old for their academic intelligence.

Several panellists also called for streams such as Normal (Technical) to be removed, noting the negative labels associated with students of these streams.

Mr Josephus Tan, a lawyer and director at Fortis Law Corporation, who took the PSLE in 1991 and scored 183, said: "What is bad is that there is a tendency to shift towards labelling and stigmatisation at a very, very young age."

The pressure on children today also seems to have grown, with more parents sending them for tuition and enrichment classes.

Mother-of-five Tracey Or, who blogs about education issues, said her daughter had asked for tuition in Primary 3 - even though she was not doing badly - because her schoolmates were comparing how many tuition classes they had.

"And that was when it really didn't make sense any more."

She chose to home-school her daughter, now 12, and 10-year-old son. "We need to step back... let her explore, give her the space, the time to just get out of this." Ms Chye, a former principal of Montfort Junior School, acknowledged that generations of Singaporeans have been brought up in a society that has mainly revolved around academic success.

But the system is slowly starting to find a balance between this emphasis on academic grades and holistic development, she said, adding that teachers are being trained to assess other forms of abilities such as art and music.

The MOE announced earlier this year that in 2021, the PSLE will do away with the aggregate score - often criticised for being the cause of excessive stress among pupils and parents. With the change, children will no longer be graded relative to one another.

Parents also have to do their part in relieving the pressure on children, and stop demanding good grades simply to see their children get into brand-name schools, said the panellists.

The mother of three boys - a pair of 11-year-old twins and a 13-year-old - said it is more important for parents to discover their children's learning styles and focus on how they can develop skills such as problem solving and creativity.

A version of this article appeared in the print edition of The Straits Times on December 05, 2016, with the headline 'Is PSLE a necessary checkpoint?'. Subscribe
Topics:
More
Whatsapp Linkedin FB Messenger Telegram Reddit WeChat Pinterest Print Purchase Article Copy permalink