The proportion of SIT graduates who found full-time work six months after completing their final examinations was 82.9 per cent, just like in 2017, and this was up from 77.1 per cent in 2016.

SIT said in a statement on Tuesday (Sept 17) that more than 70 per cent of its graduates from its own degree programmes in last year's batch received job offers from companies through the university's integrated work study programme, which is longer than typical internships.

Associate Professor Ivan Lee, SIT's vice-president for industry and community, said the university was heartened that its students continued to enjoy "high employability and competitive salaries".

He said that its signature integrated work study programme (IWSP), which takes the form of eight-month to year-long internships, is valued by employers and designed to meet the needs of industry partners. 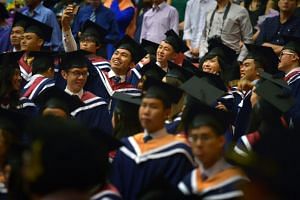 Pay for fresh university graduates rose last year; strong job prospects for those in IT

7 in 10 NTU graduates secured jobs before graduation in poll of 5,000

"IWSP allows undergraduates to work on real-world projects that enable them to integrate their studies with workplace learning, and this has reaped positive results," he said.

This is the fifth time SIT has taken part in the annual graduate employment survey. About 85 per cent of its cohort of 1,707 graduates responded to the survey, which was conducted from March 1 to May 14 this year.

The latest graduate employment survey for NUS, NTU, SMU and SUSS shows that 81 per cent of graduates were in full-time permanent work last year, and the figure was 86 per cent for SUTD graduates.