SINGAPORE - As a sous chef at a three-Michelin-starred restaurant, Mr Bernard Lim was used to preparing fine French cuisine.

Now, the 34-year-old Singaporean is cooking dishes like Japanese chicken curry, mee soto, fish korma and spaghetti with chicken bolognese for pre-school children - meals which have proved popular across the 143 My First Skool centres across Singapore.

NTUC First Campus, which runs the chain, released a set of 21 recipe cards - called Recipes with Love - on Friday (July 19), which parents and other members of the public can download for free in an effort to promote healthy meals to children.

They will be available on the My First Skool website by the end of the month.

The recipe cards have been compiled by dietitians and nutritionists, and include profiles of My First Skool cooking staff as well as the Health Promotion Board's guidelines on healthy and hygienic food preparation.

Mr Lim, who is one of the chefs featured, says that some of his dishes have proved so popular that even "picky children have two to three servings".

Mr Lim worked at the now-closed Joel Robuchon Restaurant, before becoming head chef at the My First Skool centre in Punggol Drive around 18 months ago.

"I wanted a new challenge," said the father of two. "I also wanted to gain experience in cooking for children to help understand my own." 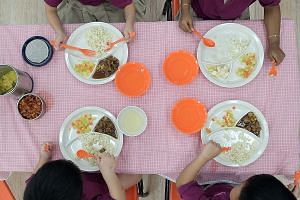 Another cook featured is Madam Sakunthla Chelladurai, 59, one of My First Skool's longest-serving, having worked at the Bukit Panjang centre for 16 years.

Known to the kids affectionately as "Aunty Sakun", she recalled how one child liked her food so much that she wanted to eat her meals - such as spaghetti, nasi lemak and cheesecake - during school holiday time.

"Her mum said that at home she wouldn't eat, but she loved my food," she said.

Recipes with Love was launched at the Marina Bay Sands Expo and Convention Centre as part of the Learning and Sharing Festival 2019, a three-day event organised by My First Skool for educators and staff to share knowledge and resources on early childhood care and education.

"Besides our educators, many others in our pre-schools also play important roles," said Minister for Social and Family Development and Second Minister for National Development Desmond Lee, the guest of honour at the launch.

"You are the unsung heroes, who work tirelessly to ensure a good experience for our children, with healthy meals, a clean environment and readily available learning resources."

Meanwhile, about 700 pre-school teachers and staff from Skool4Kidz, Kinderland, NurtureStars, ELFA Preschools and The Grange Institution - all under the Crestar Education Group - attended a day-long annual training event on Friday.

Nutritionists conducted a refresher course on nutrition and food safety.

Madam Ng Mee Lan, a 62-year-old cook at My First Skool centre in Jalan Sultan, said she spends time on improving the nutritional content - as well as taste - of her dishes, and tries to make fruit and vegetables more appealing to children by carving them into flowers and slicing them thinly.

Interacting with children is also making her feel younger. She said: "Talking to them makes me feel so lively that my friends have noticed I'm starting to grow black hair among the white again."