The word "unseen", to most students taking literature, would be associated with a section of the examination paper that requires them to analyse texts they may not have seen before.

But a group of Singaporean literary enthusiasts has come up with an online magazine named after the section - often seen as difficult to score well in - in an effort to introduce more creativity and imagination to the field of literature.

The group, comprising mostly undergraduates, started the magazine last year. It has since produced two issues in which it invites the public to submit personal responses to texts used by A-level students in the form of 1,500 to 2,000-word essays, poetry or other creative means.

They plan to eventually produce two to three issues each year. 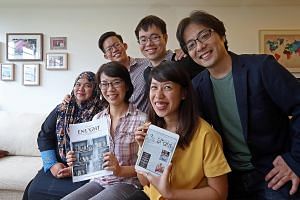 Treasure trove of ideas to light up literature lessons

The second-year undergraduate reading English and English literature at Oxford University said: "Literature shouldn't be studied in a way that is so focused on exam questions. We want to help students respond in more creative and critical ways. Hopefully, they will gain fresh insights to texts which seem familiar to them. And that's what the Unseen exam component is also about - responding spontaneously in the best way you can."

While selecting and editing the pieces, we wanted to keep them accessible to A-level students of different abilities... We want this to be a resource - for students to read it online and have a think, for teachers to point to it in class.

Like Ms Lim, some in the magazine's team of eight - one of whom is the Web designer - are studying in Britain, while a few are based in Singapore.

One of them, Ms Joanne Loo, 24, is now a secondary school literature teacher. She earned an English literature degree at the University of Warwick and a master's in Victorian literature at Oxford University.

The seven editors oversee submissions according to the three sections of the A-level English literature paper: Reading Literature, The Individual And Society, and Victorian (1830-1899).

Unseen's first issue, titled Beginnings, was released in February last year. It contained a range of pieces, such as a poem in response to English poet Christina Rossetti's sonnet about the speaker's poor memory of the first time she meets her lover. The second issue, which came out this month, focuses on the theme Versus, or making comparisons between texts, characters or time periods.

For instance, a piece written by ex-Victoria Junior College (VJC) student Priya Ramesh examines the journey of Anakin Skywalker, a character in the Star Wars universe, and pits the elements of tragedy against William Shakespeare's Othello and Hamlet.

The essay also explores the three characters' struggles and common themes, such as light versus dark.

Ms Lim, who graduated from VJC in 2013, said the team received 10 to 12 submissions each for the two issues from literature students, teachers and writers.

"While selecting and editing the pieces, we wanted to keep them accessible to A-level students of different abilities," she said. "We know some students are very high achievers in literature, and some are just taking it as a subject. But we want this to be a resource - for students to read it online and have a think, for teachers to point to it in class."

She said that the team behind Unseen had received good feedback from Tampines Junior College - one of the teachers, Mr Goh Wee Kiat, contributed an essay to the website recently.

The JC submitted a few essays by its students in response to the magazine's invitation to analyse two war-related poems.

The team has also received support from local writers Christine Chia and Pooja Nansi, who have written the forewords for the first two issues.

Ms Lim said that the team is in talks with local publisher Ethos Books on the possibility of turning the series into a book.

Her teammate, Mr Leonard Yip, said the Unseen platform aims to give students a chance to explore their texts outside the pressure-cooker of exam formats.

"Even for students who don't yet feel confident enough to write a submission, there's still a lot of value that can be found in reading the responses of their peers," said the 21-year-old, who is going to study English literature at Cambridge University in October.

"In doing so, they gain an insight to how other people grapple with the themes and lessons of the texts - and that in itself will shape their own responses."

•Those who want to join the team or contribute articles can contact unseenthemagazine@gmail.com