Flubs, successes and tears marked a morning of battle nationwide, as primary school pupils vied to be zonal champions in the mind sport of spelling on Saturday (April 16).

The zonal round of the RHB-The Straits Times National Spelling Championship 2016 was at its most intense in its five years. It featured 117 of the top scorers from the preliminary written round, which had 1,805 registrants. The pupils took on their schoolmates, friends - siblings too - for places in the final.

Elated skipping, air-punching and relieved cheers followed correct words, though as many tears of frustration flowed when unexpected mistakes were made. 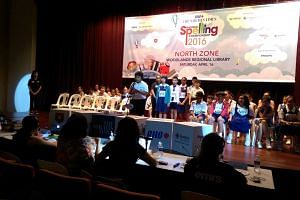 The game began simultaneously in four locations around 10am. Parents turned out in full force at Woodlands Regional Library for the North zone, Singapore Press Holdings Media Centre for South zone, Tampines Regional Library for East zone and Nanyang Polytechnic for West zone, offering encouragement all around.

The champs who emerged from this morning's competition were:

Ms Serene Goh, chief judge in the West and editor of The Straits Times Schools team which has run the event since 2012, felt this year's showing was four years in the making.

"Competitors had better techniques and strategies, and they kept their composure a lot better," she said.

Each zonal champion won $500 and is guaranteed a place in the final.

The 20 or so highest ranking pupils, including the zonal champs, will face off at the final on April 30. At stake is the top prize of $5,000 and the challenge trophy for the winner's school.

The competition is organised by RHB Banking Group and The Straits Times, in partnership with the Ministry of Education. It is supported by Nanyang Polytechnic and the National Library Board, with venue partners Singapore Zoo and Suntec Singapore, and audio and sound partner Philips.

For more info, go to www.straitstimes.com/bigspell