At Henry Park Primary School, pupils do not have continual assessments (CAs) or examinations at the end of some terms.

Since 2014, the school has done away with CAs for Primary 3 to 6 pupils, replacing them with short quizzes for each subject to evaluate pupils' learning, along with class assignments.

Its principal Martin Koh said time is then freed up during the terms for pupils to conduct scientific experiments and develop traits like creativity. For instance, the school runs a five-week programme called Young Investigator Project for pupils to design their own projects and carry out research.

"Such projects take time, and I find that because they are not graded, the children take risks, learn from mistakes, and this deepens teaching and learning," said Mr Koh.

Henry Park Primary is one of several schools that have cut down on exams of their own accord in recent years. The Ministry of Education (MOE) announced yesterday that schools will cut down on examinations across different levels in the coming years, in an effort to move away from an overemphasis on academic results.

From next year, all examinations and assessments that count towards a final grade for Primary 1 and 2 pupils will be removed, and mid-year examinations at the Primary 3, Primary 5, Secondary 1 and Secondary 3 levels - which are key transition years - will be scrapped.

The changes will free up about three weeks of curriculum time every two years, said MOE. 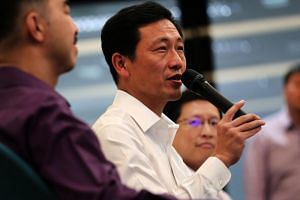 In a speech earlier this week, Education Minister Ong Ye Kung told school leaders: "There is nothing wrong with having examinations and class tests, but we need to use them in suitable quantities.

"By all means, use formative tools such as worksheets, class work and homework to gauge learning outcomes and the strengths of each child... Our focus is to return the curriculum time to the schools to free up learning and teaching."

Parents said that while removing mid-year exams will relieve some stress, they wondered if it would end up shifting the pressure to the final-year assessments.

Some felt that it might be harder to know where their child stands with no Primary 3 mid-year paper on top of not having exams and overall grades in Primary 1 and 2.

Madam Karen Lim, 41, a banker with a Primary 1 daughter and Primary 5 son, said: "It is good that I won't have to stress so much over preparing for exams, but my worry is that they become too relaxed in the first two years, and then panic at the end of Primary 3.

"At the end of the day, they are still taking a very major exam - the Primary School Leaving Examination - and that is crucial for secondary school placement."

But Madam Karen Kang, 51, believes that there is room in schools for other activities beyond tests and exams.

The housewife said that her Secondary 3 son and Primary 6 daughter benefited from Henry Park Primary's scrapping of continual assessments.

"We still get feedback from smaller tests which flag areas of weakness," she said, adding that her daughter had the chance to be part of an investigative project that saw her making presentations, working in a team and testing theories.