SINGAPORE - The National University of Singapore (NUS) Business School will be getting a new dean next year.

He has worked with the Monetary Authority of Singapore, the World Bank, the International Monetary Fund, the Asian Development Bank, the US Treasury, as well as the European Central Bank and the central banks of countries like Canada, Britain, Japan, New Zealand and Israel.

NUS president Tan Eng Chye thanked Prof Yeung for his "strong leadership" of the university's business school for over a decade.

Prof Yeung, who joined NUS in 2008 from New York University's Stern School of Business, is planning a sabbatical before returning to the faculty.

"We are delighted to welcome Professor Andrew K. Rose… A long-time friend of the university and Singapore, we are confident that Andy will lead the NUS Business School with wisdom, energy and purpose," Prof Tan added. 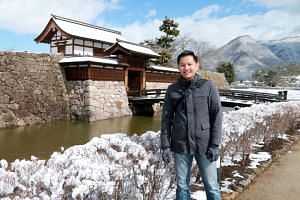 Prof Rose was the founding director of the NUS Risk Management Institute in 2006 and has also held appointments in the NUS Business School since 2012.

The expert in international trade, finance and macroeconomics said that he was excited by the opportunity to deepen his relationship with Singapore and NUS.

"The school has earned a sound reputation for combining the strengths of Western schools of thought and practices with uniquely Asian perspectives," he said.

"I am grateful for the honour... and look forward to working with my colleagues in the school to advance the momentum of research and industry engagement and nurture the next generation of globally engaged business leaders."