When my elder child, Jason, had to register for primary school three years ago, the process was straightforward, with little angst.

Neither my husband nor I wanted to do volunteer work to get him into a "brand name" school. My husband's alma mater had closed down and mine is a girls' school, so it was easy to pick one for Jason within 1km of our home.

Fast forward three years and it is time for our girl, Shannon, to register for Primary 1.

Her situation is slightly more complex. She has the option of her brother's school or my alma mater, a popular girls' school far from where we live. Based on current guidelines, she is sure to get into either.

In Jason's case, it was easy to choose proximity since there was no "brand name" alternative and I thought Shannon would just follow in her brother's footsteps. 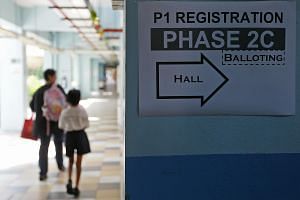 Choosing a primary school: Distance and school's reputation matter most to parents

But as the date for registration drew nearer, I began to wonder if my decision to send her to a neighbourhood school was right.

When I mentioned that Shannon would probably go to Jason's school, my mother - who had queued outside my primary school gates to get me a place there 30 years ago - commented that my granddaughters would no longer be able to attend my alma mater because of my decision.

I realised there may be repercussions in the near term. The stakes are higher now. Specifically, my alma mater has an affiliated secondary school with a through-train option which allows students to skip the O levels. I may not feel the pinch now but perhaps I will think differently during crunch time - when Shannon is in Primary 6.

Our then principal was a veteran educator who believed firmly in an all-rounded education, way before the term became a buzzword. This, to her, meant ample time for non-academic activities.

At the top of the list: an hour for recess every single day.

On special occasions such as Children's Day, Teachers' Day or results day, we had two hours to play. I would eat with my friends, before we wandered all over the sprawling school grounds playing hopscotch or piano, or simply chatting.

Almost as many old pianos (donated by parents) as tape-marked hopscotch courts dotted the school.

I loved the family spirit we had. We were taught to greet seniors in the school as jiejie (elder sister in Mandarin) and, in return, they called us meimei (younger sister).

Classroom lessons would at times be interrupted by broadcasts over the public address system from our principal, some times with urgent announcements but, more often than not, with celebratory news of awards, or just reminders to drink water because the weather was scorching.

The interruptions were always met with glee by us, but not so much by the teachers, who would not be able to carry on with the lessons.

We had plants in each balcony of our classrooms to tend to as part of our classroom duties. Weekly assemblies were filled with stories on values, performances or sing-alongs.

I have no idea about the state of matters in the school these days, but it is with much fondness that I look back on those days. I would love for Shannon to wear the same uniform, attend the same school and learn the same ethos as I did.

And yet, if I were honest, sending her to Jason's school is not such a bad choice either.

It has good programmes. For instance, Jason learnt swimming in physical education lessons in Primary 1, and picked up violin and angklung in weekly music periods in Primary 2. I had no such opportunities in primary or even secondary school.

With the time saved on travelling, he has more time to read, play, do homework and rest rather than doze off on the bus.

If both attend the same school, they would be able to talk, laugh and gripe about school issues, teachers and friends. It would be a common bond for them.

More importantly, Shannon has always aspired to be like her brother. She has an expectant smile when we pass by and walk around Jason's school, knowing it will one day be her school.

Jason, too, seems to be looking forward to it. He tells me that Shannon can order laksa during recess as she likes spicy food. He tells her that she will have a buddy during recess to help with food orders initially.

Whatever my decision, I believe school is what you make of it. A "brand name" school may be the pinnacle of success for some, but just as many thrive in a neighbourhood school.

As a parent, as long as my child is happy to go to school - and is happy there - I think I've made the right decision.

Jason has a more pragmatic point of view.

"Since your old school doesn't have one-hour recess any more, meimei isn't missing out on much. She might as well go to my school," he said.