They were both conferred the Honorary Doctor of Letters at the main ceremony of the NUS Commencement 2017 on Thursday morning (July 6), where about 230 graduates from the NUS School of Computing, NUS Business School and Yale-NUS college also received their degrees.

Professor Schwab, who founded the WEF in 1971, has led the non-profit foundation's reconciliation efforts in different parts of the world, including promoting inclusive globalisation, supporting social entrepreneurship and steering public-private partnerships to address global issues like public health and climate change.

He has been a strong supporter of NUS' active participation in the WEF for more than a decade, and has also actively engaged with key thought leaders in Singapore.

Mr Ee, who is also chairman of Eastern Health Alliance and president of the Institute of Singapore Chartered Accountants, gamely took on challenging positions in organisations at critical periods of transition.

When public trust in the National Kidney Foundation (NKF) plummeted after a corruption scandal in 2005, Mr Ee accepted the role of interim chairman and acting chief executive of NKF.

He also held the post of chairman of the Public Transport Council from 2005 to 2012, where he was tasked with recommending periodic fare reviews for public transport, and chaired the Ministerial Salary Review Committee in 2012. 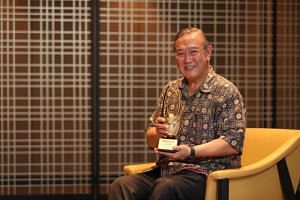 In his speech at the NUS ceremony, Mr Ee urged graduates to hold on to their "fundamental shared values" even as society continues to evolve at an accelerated pace.

"Values define an individual. The collective shared values define the community. Without shared values, the community will break into tribes... going back to seeing and treating each other as a fellow member of humankind (can help us) build a better world for future generations," said Mr Ee.

A total of 10,654 students graduated this year, including 6,622 receiving bachelor degrees and 4,032 receiving graduate degrees.

There will be 24 graduation ceremonies that will be held at the University Cultural Centre from today until next Thursday (July 13).

Professor Tan Chorh Chuan, president of NUS, said that NUS has been placing emphasis on nurturing graduates with skills that are demanded by the future economy, in the face of technological disruption.

The pioneer batch of Yale-NUS graduates this year has helped NUS develop "a unique mode of liberal arts education that investigates complex issues from both global and Asian perspectives", he noted.

The School of Computing has created new academic pathways which include entrepreneurship and industry engagement, while the NUS Business School has also revamped its courses and increased its emphasis on business analytics.

He also encouraged graduates to constantly cultivate their skills in two areas that go beyond the knowledge and abilities that are specific to their chosen careers. "Grow a mindset which looks with optimism to the possibilities of the future and is not deterred by obstacles along the way. Secondly, contribute in service, and have a positive impact on society."