School, to be renamed Canossa Catholic Primary, will take boys in Primary 1 cohort

Canossa Convent Primary School, which has been a girls' school for all its 77 years, will soon start taking in boys.

To be renamed Canossa Catholic Primary, the school in Sallim Road will enrol boys in its Primary 1 cohort from next year.

The move to go co-ed comes as two other schools in the surrounding MacPherson-Aljunied area - MacPherson Primary and Cedar Primary - merge next year.

Mrs Eugenie Tan, principal of Canossa Convent Primary, told The Straits Times that the school together with the Canossian Sisters, an international order of religious women founded in Italy, had been deliberating on the idea of accepting boys in the last two years.

"Since the school is part of a large campus which also includes Canossaville Pre-School and Canossian School for the Hearing Impaired - both of which already cater to girls and boys - it is a natural progression for Canossa Convent Primary to also do the same," she said.

"It will also give boys an opportunity to receive a Canossian education grounded on strong values and service leadership throughout their primary school years," she added.

Parents can register their sons and daughters from July for the new co-ed school's Primary 1 intake next year under the various registration phases.

A lot of girls enrolled in the school have brothers who have to go to another school. So this will be more convenient for parents. It's good that the school can also instil the same values of compassion and empathy in boys.

MS REBECCA CHIN, 39, who studied in Canossa Convent Primary till 1991, on the school accepting boys.

I thought it was a pity I didn't have daughters to send to any of the Canossian schools... I like the ethos of the school. I also like that it works closely with the sisters.

MS DAWN YIN, a choral instructor , who has a five-year-old son, said it is "perfect timing" that Canossa Convent will be taking in boys. 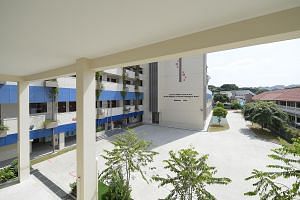 Catering to children with different needs

One of those who will benefit is Mr Edwin Chan, whose son, now in the second year of kindergarten, will be able to join his daughter, who is in Primary 2, at Canossa Convent Primary.

"This is perfect timing," said the 43-year-old sales manager.

"I can send my kids to one school, and my daughter can guide her brother around school next year."

Set up in 1941, the school was started by the Canossian Sisters, who came to Singapore in 1894. They have served the community in various fields such as education, pastoral care for the sick and elderly, caring for orphans and children with special needs.

Canossa Convent Primary is the latest mission school to become co-ed. Others include Hai Sing Catholic School, which started as a girls' school, while St Anthony's Primary and De La Salle changed from boys' schools to co-ed schools.

At the moment, Mrs Tan said there are no plans for St Anthony's Canossian primary and secondary schools - all-girls' schools in the Canossian family - to take in boys.

For Canossa Convent Primary, it would not be the first time that it has welcomed boys.

The school is located within the Canossian Eduplex, which includes facilities like a student care centre, a pre-school which also caters to children with special needs, a school for those with hearing loss and a convent for nuns.

For the last 20 years, pupils, including boys from the Canossian School - which caters to deaf children - have crossed over to Canossa Convent Primary to join their counterparts in classes.

Sister Marilyn Lim, supervisor of the Canossian School and Canossian Children and Community Services, said: "This daily integration gives them the maximum exposure to a mainstream school community. They are able to sit their Primary School Leaving Examination with significant success and move on to the secondary schools."

In the early years, the nuns also ran an orphanage that took in both boys and girls.

Choral instructor Dawn Yin, who has a five-year-old son, said it is "perfect timing" that Canossa Convent will be taking in boys.

"I thought it was a pity I didn't have daughters to send to any of the Canossian schools, but I was telling my husband now we have a chance," said the 36-year-old who attended St Anthony's Canossian Primary School.

"I don't want my son to be in a pressure-cooker school environment, and I like the ethos of the school," she said.

Ms Rebecca Chin, 39, who studied at Canossa Convent Primary till 1991, said alumni welcome the change: "A lot of girls enrolled in the school have brothers who have to go to another school. So this will be more convenient for parents."

"It's good that the school can also instil the same values of compassion and empathy in boys," said the head of human resource in a multinational company.