Five years ago, she was at the lowest point in her life - mocked in person by her classmates for being overweight and taunted on Twitter for going to church.

The victim of bullying, now 20, recalled: "It was difficult to ignore. I would go home crying to my mother. When I quoted Bible verses on my Twitter page to encourage myself, the boys would attack me, saying that I was acting holy, that I was fat, and I could not erase my past.

"It was very hurtful, but I told myself that they were just having fun at my expense."

More primary and secondary students have been seeking help over bullying from the Singapore Children's Society, which started to extensively track bullying cases last year.

The bullying lasted about a year from Secondary 3 to 4 but, with strong family support, she moved on and did well in her studies, graduating from a polytechnic this year.

The age-old problem of bullying in schools has spilled into cyberspace and is swelling with the burgeoning role of the online world in real life, counsellors said.

More primary and secondary students have been seeking help over bullying from the Singapore Children's Society, which started to extensively track bullying cases last year.

Last year, it saw a total of 134 cases. This year, as of April, it had received 58 cases, up from 34 during the same period last year.

One of its centre directors, Ms Rachel Tan, said: "There have been more talks on bullying, so perhaps there is more awareness of the issue, and students are more willing to come forward to talk about it." 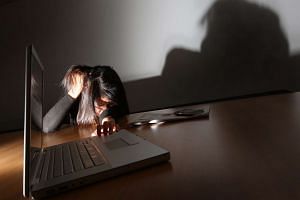 Girl felt ostracised by her peers, so she quit her school

Bullying that involves physical violence remains an issue, as shown in the case of two boys in Shuqun Secondary School who were hit on their heads by another boy using books 10 days ago.

To make matters worse, cyberspace has led to the phenomenon of cyber bullying, which has aggravated emotional bullying.

Experts said that cyber bullying refers to repeated aggressive acts carried out over digital devices and related platforms, such as social media, blogs and text messages.

More secondary school students here feel that they have been on the receiving end of hostile acts online, a recent poll by cyber wellness firm Kingmaker Consultancy found.

The firm has been tracking online aggression for several years by conducting annual surveys with thousands of students. This year, it surveyed some 2,600 students aged 13 to 15 between January and June.

The teenagers reported that acts such as being left out of a group online on purpose were most common. Other acts included spreading rumours through text or online messages, uploading content that made fun of others, and sending offensive messages.

The prevalence of some of these forms grew by about 2 to 7 percentage points from those in 2013.

For instance, 43 per cent of male students reported being made fun of by others who posted pictures or jokes about them online. This is up from 36 per cent in the earlier poll.

More female students also felt the same - 32 per cent in the latest survey, up from 28 per cent previously.

Mr Poh Yeang Cherng, Kingmaker's principal consultant, said: "As more young people use the Internet to express themselves, they pick up aggressive habits from places such as online communities, social media and game platforms."

In the survey, up to a quarter of students also admitted that they had been the "bully" - making fun of others, gossiping or excluding another person from a group.

Relational bullying - covert behaviour that hurts others emotionally or socially - is now easier with the convenience of social networking apps and sites, experts said.

Mr Poh said that bullying that takes place online is harder to detect as there is "little feedback".

"It's not as easy to see the effects of cyber aggression. A lot of people also don't think that it's a big problem because there's no physical violence," he added.

"But the online world brings a different dimension to relationships between people, and it has the potential to cause misunderstandings among friends."

The consultancy explains to students in its workshops how emotional bullying can be more hurtful than physical pain, he said.

Popular social networking apps such as Ask.fm contribute to this trend. Created in 2010, the Latvian-run platform allows users to ask someone questions anonymously.

It is targeted at those between the ages of 13 and 25, and has been linked to several teen suicides and cyber-bullying cases in Britain.

The company running it has since stepped up safety guidelines and hired more moderators. Users can also report offensive comments.

Many students here also use the platform, although they said that it often exacerbates offline drama among groups of friends, such as spreading rumours or passing vicious remarks.

A Secondary 3 student in a girls' school said since her schoolmates started using the app last year, "there have been some bullying and catfight incidents".

She added: "Things that happen in real life get blown up by comments by haters."

Another Secondary 3 student said she set up an account this year to read about school and co-curricular activity "politics" among schoolmates.

Some students were so upset by rude comments - such as being called "sluts" and "bitches" - that they cut their wrists, she said.

Being unaccountable for one's words also makes users bolder. "If the victim complains to teachers, they won't be able to find the culprits," said the student.

The Ministry of Education said that schools have measures to support a "safe, conducive environment for learning".

It added that schools take "immediate action to investigate and assess all reported cases" of bullying and also take "appropriate disciplinary actions" against bullies.

"Schools also support the affected students and help those involved to learn from the incident," it said.

Associate Professor Maureen Neihart from the psychological studies department at the National Institute of Education said schools need to have a clear anti-bullying policy.

"This involves educating teachers and holding bullies accountable for their actions," she said.

"Adults have to ask kids explicitly what's happening in their lives, how they're treated in school, if there are students picking on them."

Dr Lee said: "It's hard to detect emotional bullying, but teachers and counsellors must be seen as people who are supportive and willing to listen rather than unhelpful."