SINGAPORE - The biggest mistake for Singapore's education system is to think that "if it ain't broke, don't fix it", said Deputy Prime Minister Tharman Shanmugaratnam on Wednesday evening (Sep 20).

In a speech addressing some 1,500 students, academics, university students and members of the public, he laid out the challenges for the education system: to develop a truly innovative society while retaining social cohesion.

"The system that we have today is different from the system we had 20 years ago, and quite different from 50 years ago. There's been constant evolution of our education system, and that's really our challenge and our opportunity for the future," he said, speaking at the first Majulah Lecture organised by Nanyang Technological University (NTU).

"In education, more than in any other field, we will only know how well we are doing 20 or 30 years from now. If we don't keep changing, we will end up on the wrong side of history. So we must keep changing, and have the conviction that by changing and experimenting, we are best preparing ourselves for the future."

Mr Tharman highlighted five key shifts that the education system must make to face the challenges of a tumultuous future.

The first, he said, is to do more as early as possible to give every child "a fair chance of success". 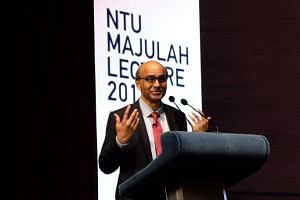 "As some would put it, you've got to mitigate the 'lottery of birth'. People are born with advantages and disadvantages. Fortunately, and this is the silver-lining, neurological studies show that neural growth is malleable to intervention, if it takes place early enough," he added.

KidSTART - a government scheme to help disadvantaged children - is a major initiative in early intervention, he pointed out.

"The benefits of evenly-distributed quality across the pre-school system will be for everyone, but especially for those who start at a disadvantage."

Secondly, there needs to be "fluid and flexible pathways as children grow up", he added.

"We should avoid the extremes of either uniformity or rigid differentiation, and avoid paths with dead ends. Every path must be porous, allowing you to move from one path to another."

He said that Singapore has embarked on this path of flexibility a decade ago, for example, when it moved away from streaming students. It started with merging EM1 and EM2 streams and doing away with EM3.

Today the education system is adopting subject-based banding and greater fluidity in secondary schools, he said. "Few people are strong in everything and few are weak in everything."

The third challenge is to reduce the academic load in schools and move towards a broader meritocracy, said Mr Tharman.

"If we want to develop a culture of innovation and creative ability, it requires more space and time for young minds to develop these traits," he said.

"The science tells us that having the time and space for your mind to wander when you are young is critical in developing creative abilities. It doesn't happen if we spend a large amount of time working on high-stakes exams, you don't develop the creative part of your brain."

"We need to provide a diversity of experiences for children as they grow up outside of classrooms," he said, adding that schools are broadening their admissions systems to allow students to develop in diverse ways.

The fourth challenge is to develop one's potential throughout life, said Mr Tharman, adding that innovation requires a deep mastery of skills, which comes from experience, thinking and doing over time.

But he noted that Singapore still does not have a culture amongst employers of investing in their employees for the long term.

The final shift is for Singapore to deepen its multiculturalism, which he said, has to start from having experiences from an early age.

"The beautiful thing about kids is that they love play, they love dance, and they love sports. We can shape these instincts if we are conscious about mixing them early in life," he said.

He gave the example of co-curricular activities, which he thinks "are too ethnically-defined in practice, in ways that sometimes puzzles."

"Football today is different from what it was in 70s and 80s, you look at our national team. All very good players. But it used to be a much more multiracial team in those days," he said.

"Volleyball, basketball, table tennis - the first thing that strikes people - "Chinese" game. How about the rest of the world? You have all sorts of countries playing basketball, volleyball and table tennis. In our region itself, the Indonesians, the Filipinos, are top in basketball and volleyball. We are trapping ourselves too easily, and it is not difficult to change."

In this process of deepening multiculturalism, the Singapore identity is further strengthened, said Mr Tharman.

He ended his nearly an hour-long speech with a phrase from the National Anthem.

"When you think of our Anthem, remember "Mari kita bersatu, dengan semangat yang baru" (with a new spirit)," he said.