More than 100 pupils from 45 primary schools gathered at four venues islandwide on Saturday (April16), hoping to spell their way to success.

They were the 117 top spellers from last month's preliminary round of the RHB-The Straits Times National Spelling Championship, emerging the strongest contenders from a record 1,805 participants.

Unlike the previous round which was a written test, the zonal round - pupils compete against others in the same school zone - is an oral competition. Contestants stand on stage and spell aloud the words read to them by a pronouncer. 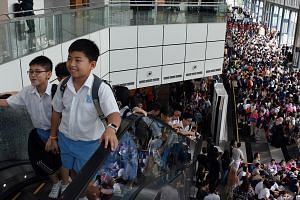 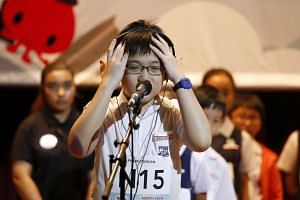 After Saturday's round, a champion will be declared in each zone. Each zonal champion wins $500 and is guaranteed a place in the finals. The rest of the competitors will be ranked nationally based on their performance.

The top 20 or so highest ranking pupils, including the zonal champs, will face off at the finals on April 30. At stake is the top prize of $5,000 and the challenge trophy for the school of the winner.

The competition is organised by RHB Banking Group and The Straits Times, in partnership with the Ministry of Education. It is supported by Nanyang Polytechnic and the National Library Board, with venue partners Singapore Zoo and Suntec Singapore, and audio and sound partner Philips.

For more info, go to www.straitstimes.com/bigspell