Wendy Wong was inspired by her mum, a teacher, to have a positive impact on lives

When she was a pupil at Mattar Primary School, Ms Wendy Wong would peep into classrooms and watch admiringly as her mother's students gathered around her.

"Seeing her have a positive impact on the lives of these students was really inspiring," she said of her mother, Madam Lam Chiew Kin.

Going to the same school where her mother was teaching also got Ms Wong, now 42, thinking about becoming a teacher.

Her resolve was cemented when in secondary school, she joined the Girl's Brigade - where she discovered her love for mentoring.

Other teachers would lash out at me, but she wasn't like that... If Ms Wong didn't believe in me, I would not have changed at all.

MR RUFFORD TAN, who was the first and only student to make Ms Wong cry. He is now head of operations at a fire safety consultancy. They still keep in touch.

Dedicated teachers, who noticed the potential in the shy girl who lacked confidence, helped mould her into a leader.

"My secondary school teachers invested time to nurture and bring out the best in me, which made me clear on what I wanted to be," said Ms Wong, a senior mathematics teacher at Geylang Methodist Secondary School.

An educator for 20 years, she is also the covering head of department for curriculum and student development for Normal (Academic) and Normal (Technical) students, and captain of the school's Girl's Brigade. 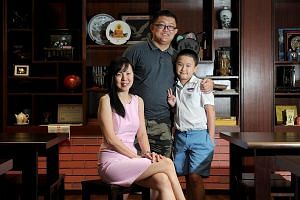 She lives with her mother, 73, her brother, 46, and his family in a five-room flat in Sims Drive. 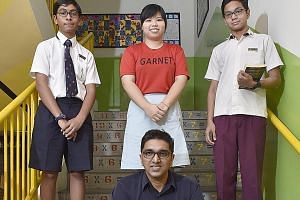 The revelation that a teacher's dedication could greatly impact a student's life is what continues to drive her to do the same today.

In 2012, when collaborative learning was not yet prevalent, she was explaining a maths concept to a graduating Normal (Technical) class, when she began to feel frustrated. "Here, I had a class of 40 students, yet I could only help one at a time," she said.

That was when she came up with a peer coaching strategy, pairing weaker students with stronger ones. As a result, 47 per cent of the class attained distinctions for their N-level mathematics, up from 20 per cent in the mid-year examinations.

Ms Wong continued to use the peer coaching strategy for her mathematics classes every year.

One of her students, Secondary 3 Normal (Academic) student Ulysse Yeo, 15, was someone who never thought he would benefit from it.

He was in Secondary 2 and his grades were in the single digits. Then, Ms Wong became his teacher.

"I used to be very disobedient; I was rowdy, and didn't do my work or listen in class," Ulysse said.

"In the first term, our whole class was noisy... but she was very patient with us and, soon, our attitude changed."

Not wanting to disappoint Ms Wong, he changed his attitude to learning, cut down on playing computer games, and improved his mathematics grades by 40 marks for his end-of-year examination.

Changing students' mindsets is no easy task but Ms Wong said she does not give up easily.

"To journey with them and bring out the best in them is my philosophy," she said. "When the going gets tough, that's what grounds me."

She remembers the first and only student to make her cry, back when she was relatively new to teaching.

"He would do his work on his art drawing block, refused to cooperate, and caused a lot of noise and misbehaviour," she said, with a laugh.

"I sent him a long text saying that I would never give up on him."

Although the Normal (Academic) student did not respond well to her text, he slowly opened up to her attempts at reaching out to him.

That old student, Mr Rufford Tan, 28, is now the head of operations at a fire safety consultancy.

He remembers what prompted him to turn over a new leaf. "Other teachers would lash out at me, but she wasn't like that," he said. "If Ms Wong didn't believe in me, I would not have changed at all."

He still keeps in touch with Ms Wong and invited her to his wedding in 2014, and then to his baby's one-month birthday celebration.

Apart from seeing her students achieve success, she is also heartened to see the relationship between her students and their parents improving.

"Some students haven't tasted success from a young age," she said. "It becomes a source of tension between them and their parents."

When Sec 3 Normal (Technical) student Raziya Begum, 15, failed her maths examination again in May this year, she was afraid of attending the next parent-teacher conference. What she did not expect was for her father to cry when he met Ms Wong.

"It made me feel very guilty," she said. Eventually, the peer coaching sessions, coupled with hard work, enabled her to make strides in her maths schoolwork and bring her grades up by 20 marks.

Her father, Mr Muhammed Fadhil, 40, a chef, said: "Ms Wong was the one who helped her after school with her homework, so this wouldn't be possible without her."

When asked about her hopes for the future, Ms Wong said she wants success to be redefined.

She said: "Success is not just about getting an A grade, but about the amount of effort you put in.

"It is about celebrating who you are, discovering your own interests, passions and talents... In the midst of that, you experience success and happiness."

A version of this article appeared in the print edition of The Straits Times on August 29, 2016, with the headline 'Belief in students is her strategy for success'. Subscribe
Topics:
More
Whatsapp Linkedin FB Messenger Telegram Reddit WeChat Pinterest Print Purchase Article Copy permalink