As part of a team of teachers who helped to design the EtonHouse Bilingual Pre-School, which opened in Bukit Timah last year in March, Ms Denise Teo wanted to put into practice what she had learnt on a trip to Italy in 2014.

Inspired by the three or four pre-schools she had visited there, she decided to set up different corners, such as an art studio and a recycling area where children and parents could contribute materials that might be used in classes.

She was then a senior teacher at EtonHouse and had been sent on a company-funded 10-day study tour of pre-schools in Reggio Emilia, a city in Northern Italy.

The city is also the birthplace of the well-known Reggio Emilia approach in early childhood education - it was developed by the schools in the area after World War II, at a time when people believed that children needed a new way of learning.

You can have a tree growing in the middle of the school. When you enter any school, there is a place called a piazza - a meeting place for children, teachers and parents to chit-chat, play with materials.

MS DENISE TEO, on how schools in Reggio Emilia inspire children to learn by connecting indoor and outdoor spaces.

The philosophy is based on theories that children learn best and are capable of expressing themselves through language, play, art, modelling or music.

"The Reggio Emilia approach is something I have always been intrigued about," said the 30-year-old who is now the centre's principal.

"A lot of pre-schools are run like mini primary schools, where the children complete worksheets or do rote learning. But actually children learn through play and inquiry.

"This philosophy came to life," she said, as she stepped into the Italian pre-schools two years ago. "It's making sure that the pre-school is a beautiful place and is inspiring for children. Even as an adult, I feel inspired by the environment."

For instance, one trait of the schools there is that indoor and outdoor spaces are connected, she said. "You can have a tree growing in the middle of the school. When you enter any school, there is a place called a piazza - a meeting place for children, teachers and parents to chit-chat, play with materials." 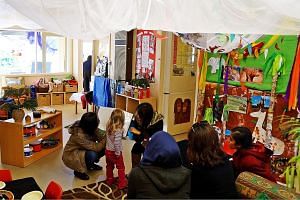 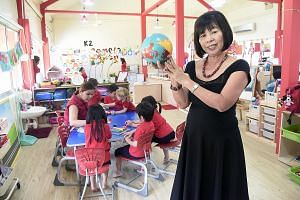 There, the city council's emphasis on early childhood education is clearly seen, she said. "Children work on projects and are encouraged to take along their work and share their learning in public spaces."

Many pre-schools there also make use of recycled materials bought for a minimal sum from a warehouse, to let children explore things such as pipes, paper and fabrics, said Ms Teo, adding that centres here use more ready-made materials from shops.

She has since been able to bring back some ideas. For example, her centre has a recycling area for children and their families to contribute materials such as egg cartons, bottle caps and cardboard boxes. "The children use these materials in classes when they are building things like a robot, a house for animals."

Another method of learning she has adopted from her time in Italy is using "digital landscapes". Over there, a teacher projected a seaside scene on a blank wall, instead of just showing the children a picture of the seaside. "The children then took materials and built in front of the digital landscape. It was an open-ended activity and they were learning through play," she said.

"Here, I projected an image of a snowstorm, also since the girls were so into the Disney movie Frozen. I left it and I wanted to observe what the children would do," she added. "Using an overturned table and some cloth, they built something like a house or a fort.

"It's easy to dismiss what young children have to say, but this is all part of valuing their ideas and making them come to life."