Housewife Rynna Atmareh, 39, has sent all three of her children, aged between seven and 10, to a financial literacy workshop.

The workshop, run by MoneyTree Singapore, a financial education centre specialising in teaching children and youth, is a day camp for children and teenagers to educate them on how to manage and save money effectively.

The programme is interactive, simulating an economy where each child is given "credit cards" and "dollars" to spend, save and invest with. Children can earn "money" by answering questions and participating.

The child with the most "money" at the end of the workshop wins a cash prize of $200.

Increasingly, parents are recognising that their children need more than just the dollar, but also a healthy dose of sense.

GROWING UP AND GROWING MONEY

Now, parents don't just want to teach their kids how to earn money, but also how to save money and make it grow.

It's good to start them young when they have small sums to manage, so that in the future, when they start making money and have larger sums to deal with, they will be able to manage.

In recent years, financial literacy classes or seminars have gained traction with schools and parents of young children.

MoneyTree Singapore has gone from holding workshops in only four schools in 2009, to doing so in 140 now.

This year, it started offering workshops to children outside of its work with schools. And the reaction has been positive, with more than 60 students signing up for its holiday programmes.

Its co-founder, Mr Ryan Soh, attributes this increase in interest to the rising standards of living.

Parents want their children to learn not to take their current high quality of living for granted, he said.

He added: "Now, parents don't just want to teach their kids how to earn money, but also how to save money and make it grow."

The objective of the classes is to instil in the students the value of money, and teach them to be smart about their finances from a young age, he said.

Ms Atmareh, whose daughter Myshea Iman Edrynna, nine, won the cash prize at the workshop she attended, said: "Living standards have escalated so much. It is good to teach children the value of money.

"The kids really enjoyed the workshop, and I feel like they've really learnt that money is hard to earn, and that they need to work for things they want."

Another financial literacy educator, Playmoolah, was geared towards corporate customers when it started in 2010, organising family-day events to teach children about money. In November last year, it launched Moolah Run and Moolahsophy, programmes targeted specifically at young people and children.

Moolah Run is a programme revolving around strategy games that seek to engage children in learning about their relationship with money, while Moolahsophy is a three-day boot camp that provides financial and character education. So far, the firm has reached about 1,500 children and youth.

The company also has a set of mobile applications and games to engage them through play.

Its marketing lead, Ms Wong Bi Ying, said: "In the past, money skills were not taught in the classroom and this new generation of parents and educators have lived through the consequences of a lack of financial literacy and knowledge, especially with the 2008 financial crisis. With that, parents and teachers are becoming increasingly aware of how integral this life skill is."

The global financial crisis in 2008 was triggered by the collapse of the Lehman Brothers bank, which had been among several financial institutions that had given risky loans to people with poor credit history, among others.

This year, seminars on money management and investment under MoneySense, the national financial literacy programme launched in 2003, will also be held in tertiary institutions to reach young people, in addition to those held in public venues for adults.

The first My Money@Campus Seminar will take place at Singapore Management University in October.

The financial education steering committee behind MoneySense is chaired by a representative from the Monetary Authority of Singapore and comprises members from ministries and public agencies.

Since 2005, 338 financial literacy programmes organised by primary and secondary schools, junior colleges, polytechnics and centralised institutes have been partially funded as part of MoneySense. 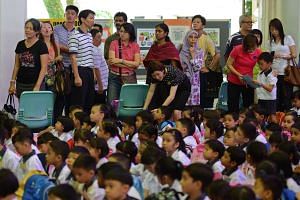 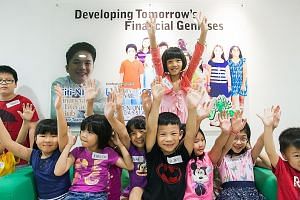 National game-creation competitions for primary and secondary school students will also be included in MoneySense this year.

Mr Daniel Tan Kim Khoon, director of the School of Interactive and Digital Media at Nanyang Polytechnic, which is organising the Singapore Games Creation Competition, said: "It's good to start them young when they have small sums to manage, so that in the future, when they start making money and have larger sums to deal with, they will be able to manage."

Mr Giuseppe Menella, 42, an Italian entrepreneur based here, believes in this school of thought.

Earlier this year, he sent his son, Leonardo, who is only four years old, to a course run by MoneyTree.

He said of his son: "The younger he is, the better and longer he will bear the lessons."

A version of this article appeared in the print edition of The Straits Times on August 17, 2015, with the headline 'A healthy dose of money sense for kids'. Subscribe
Topics:
More
Whatsapp Linkedin FB Messenger Telegram Reddit WeChat Pinterest Print Purchase Article Copy permalink