SINGAPORE - More than nine in 10 graduates from Yale-NUS College's pioneer cohort secured jobs within six months of their final examinations, according to the latest joint graduate employment survey.

The poll which was done last November, found that graduates from the liberal arts college earned a median gross monthly salary of $3,500.

Their counterparts from the National University of Singapore also took home the same pay.

The survey recorded an overall employment rate of 93.3 per cent, which includes full-time employment as well as part-time or freelance work.

In comparison, fresh graduates from NUS, Nanyang Technological University and Singapore Management University had a median monthly salary of $3,400.

Yale-NUS is an autonomous college of NUS. It was set up in 2011 and admitted its first batch of students in 2013.

In a statement on Tuesday (Feb 27), Yale-NUS College president Tan Tai Yong said: "We are very happy with the outcome of the survey, which shows that our graduates are highly sought after in the workplace. 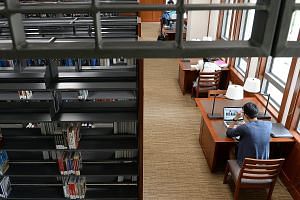 "Our Class of 2017 students have demonstrated that they are pioneers in more ways than one: from entering the first liberal arts college in Singapore and helping to shape the school culture for the future cohorts, to blazing the trail for future Yale-NUS graduates in the workplace."

He added: "We are pleased that our graduates have put what they learnt in college to good use as they contribute actively to the different industries they have entered."

The graduates have gone into both public and private sectors. The top six industries are: business and management consultancy; financial and insurance; information and communication; education; public administration and defence; and arts, entertainment and recreation.

The curriculum at Yale-NUS emphasises broad-based multidisciplinary learning across the natural and social sciences, and humanities.

Dr Trisha Craig, Yale-NUS’ dean of International & Professional Experience, said this approach is “a very important factor in today’s environment, where complex issues require a broad understanding of the field”.

To prepare students for careers, the college has also secured internships, she added. While not compulsory for Yale-NUS students, 70 per cent of them already embark on a summer college-sponsored internship, and others find their own placements.

Dr Craig also told The Straits Times that the college is piloting “group internships”, where it works with partners to develop a project with specific outcomes.

“We then assemble a team of students with complementary skills to carry it out and drive their understanding by providing supplemental support by faculty and professionals,” she said.

One example is a project which involved students working with staff from a museum on cultural and environmental heritage, to produce a final report with recommendations for the museum.

“At the same time, we involved faculty members from history, environmental studies, and research methods as well as landscape architects and museum educators who helped the students, though lectures and readings, apply knowledge from these fields to their work,” said Dr Craig.

Mr Linus Seah, who read politics, philosophy and economics at Yale-NUS and graduated last year, said that being from the pioneer cohort was a “double-edged sword”.

“We didn’t have the shoulders of years of alumni networks and experience per se to stand on and really had to advocate for ourselves,” said the 25-year-old who is working as a procurement associate at GSK Asia, the British pharmaceutical giant’s Asia headquarters.

“On one hand, prospective employees don’t really know much about our college and therefore wouldn’t be sure of taking a risk on Yale-NUS graduates,” he added.

But there were also more progressive companies willing to take on the students.

Mr Walter Yeo, who is Mr Seah’s supervisor, said of him: “He brings a fresh perspective to the organisation, very different from graduates that I have managed before.

“He sees the bigger picture very quickly and questions the purposes of certain processes and activities happening in a large multinational corporation like GSK. That has led to simplification in some of our processes, saving time and money for the company,” said the regional procurement manager.