SINGAPORE - An examiner's bag containing 32 O-level additional mathematics scripts from Singapore was taken by mistake by a train passenger in Britain in November last year.

The Paper 2 scripts, which make up 56 per cent of the overall subject grade, have not been found despite a major investigation by Cambridge Assessment to locate the bag, which was lost in transit from London to Sheffield in England on Nov 21.

This comes about a year after a parcel containing A-level chemistry answer scripts from 238 Singapore students was stolen from a courier van transporting it to an examiner in Britain in November 2017. The scripts have not been recovered.

The Singapore Examinations and Assessment Board (SEAB), which held a media briefing on Monday (Jan 14), said the 32 scripts in the latest incident were from two secondary schools - 20 from Nan Hua High School and 12 from Hong Kah Secondary School, which is now known as Jurongville Secondary.

The students, who received their O-level scores on Monday with the rest of their cohort, have been awarded final grades for additional mathematics based on their performance in Paper 1 and their cohort's performance in both papers.

Their marks in Paper 1 were used to work out their position in terms of percentile ranking within the cohort. The percentile ranking was then used to derive the missing Paper 2 mark. To check for consistency, their school preliminary examination results were also taken into account.

About 91 per cent of the affected candidates, or 29 of them, obtained at least a pass grade for additional mathematics, with about 20 achieving distinctions, referring to A1 or A2. 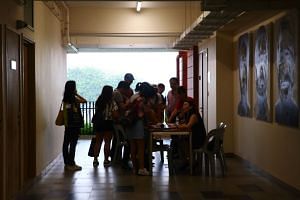 The 'testing period' for Cambridge each year

More trials before switch to electronic marking of exam scripts

The SEAB said that almost all affected candidates had better or the same grades for the subject, when compared to their school preliminary examinations.

Ms Tan Lay Choo, chief executive of the SEAB, said: "We were very upset, disappointed and also shocked that it happened so soon after the first incident last year, which is barely one year ago.

"Immediately after that, our thoughts were with students who have worked hard for the exam, and we want to give them a grade that is fair and valid that they can use for their progression."

Ms Tan added that the priority now is to ensure that the affected students are not disadvantaged in any way by the incident.

The SEAB will be meeting senior management from Cambridge Assessment in about two weeks in Britain to discuss how to improve processes.

"We'll also be looking into whether there is cause for us to seek penalty," Ms Tan said.

Similar to last year's case, the students will be given an option to retake the paper on Feb 15. The better of the two grades - their awarded grade or the grade from the second exam - will be counted. They have until Friday to decide.

Mrs Tan Jong Lek, principal of Nan Hua High School, said it is confident that SEAB and Cambridge Assessment have given the affected students a fair and valid assessment.

"The affected students accepted the news calmly when they were briefed this afternoon. We also took the opportunity to assure them that the school will support  them if they need guidance and advice in considering their options," she said.

The school has deployed one of its teachers with many years of experience to support the students who opt for re-examination.

Mr Chan Yew Wooi, principal of Jurongville Secondary School, said: "Beginning this week, the affected students’ additional mathematics teacher will be setting aside every Friday afternoon to meet those who would like assistance and guidance in their preparations for the re-examination."

It alerted the SEAB to the case on Dec 14, after it became certain that the scripts were unlikely to be found.

The examiner's bag was placed on a luggage rack near the door of a train carriage when the train became crowded. His bag was mistakenly taken by another passenger, as it looked similar to the latter's.

The examiner will not be engaged by Cambridge Assessment to mark scripts in future because he breached its security policy for the transportation of scripts by leaving them unattended.

Mrs Wilson, who attended the briefing on Monday, said: "We have very robust procedures for examiners around security of scripts. This is a really unfortunate incident, and I have come to Singapore to show you how important I take this incident, and how sorry Cambridge Assessment is."

She added that subject matter experts like teachers are used for marking. "They are from across the UK. We can't gather them all together. That's why we have procedures for sending scripts to the examiners so that they can mark them. We want to use the very best people for marking."

On tightening processes, she said: "We have sent a reminder to all examiners to reiterate to them the importance of keeping scripts secure when they are in their possession. We're also reviewing our procedures for examiners and looking at the guidelines and instructions we give them."

This could include reviewing where examiners are allowed to mark scripts. Most scripts are marked by examiners in their homes.

The exam board is also moving towards more on-screen marking or electronic marking, which would reduce the risk of scripts being lost or stolen.

Since 2015, the SEAB and Cambridge Assessment have worked closely to implement such marking processes for written scripts, which involve scanning and marking papers online using an authorised software that examiners have been trained to use.

The implementation, which is part of a review to improve marking security and efficiency, started with the N levels in 2017. Nearly 65 per cent of written scripts across the N levels, O levels and A levels were marked on-screen last year.

By this year, almost all written papers will be assessed this way.

Ms Tan said that, separately, the SEAB has been considering other ways of marking, such as scanning scripts here before sending them over to Britain, or rethinking if there is even a need to send scripts over if they can be digitised.

"The incidents may make us speed up some of the plans we have."