SINGAPORE - A group of 28 secondary schools will be the first to allow their students to take a greater number of subjects at a higher level next year, ahead of an overhaul to Singapore’s education system in a few years' time.

The Ministry of Education (MOE) on Tuesday (Sept 3) revealed for the first time the names of the 28 schools that will pilot full subject-based banding, where students take subjects at a higher or lower level, based on their strengths.

Students at these schools will be able to choose to study humanities subjects – geography, history and literature in English – at a more demanding level from Secondary 2, if they have the aptitude for them. The existing options are English language, mathematics, science and mother tongue language.

The 28 pilot schools will also try out new form class arrangements instead of the traditional sorting by Express, Normal (Academic) and Normal (Technical) streams.

Students from different streams will be placed in the same form class, so that they will take a common set of subjects that will amount to about a third of curriculum time.

These include art, character and citizenship education, design and technology, and physical education.

The MOE said that next year's pilot comes ahead of the roll-out of full subject-based banding to all secondary schools by 2024, in the same year that the Normal-Express streams will be scrapped. They would be assessed based on their performance in subjects at the Primary School Leaving Examination, as well as their school-based assessments in secondary school.

The MOE said on Tuesday that the pilot schools were selected based on their readiness, and all had taken part in earlier phases of subject-based banding and have experience in supporting students of different learning abilities.

Teachers across the schools have been undergoing training to customise learning to the different needs of students, and redesigning resources like assignments or worksheets.

The MOE said more secondary schools will introduce full subject-based banding from 2022 to 2024, and will learn from the pilot schools' experiences.

One pilot school, Queenstown Secondary, hopes to let Secondary 1 students next year have a hand in naming their classes, by deciding on themes like values, besides evenly distributing students from different streams across classes.

Its principal Madam Rasidah Rahim said the school has seen an increase in the number of students taking higher level subjects.

This is up from 8 per cent and 12 per cent in 2014 when the school first started subject-based banding, for Normal (Academic) and Normal (Technical) streams respectively.

Secondary 2 student Andre Ramraj Manalili Khurana, 14, took English, science and mathematics at Express level since last year, and eventually did well enough to move from the Normal (Academic) stream to an Express class this year. 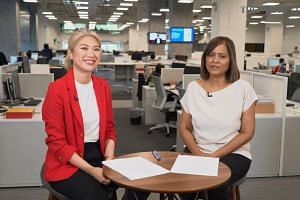 Subject-based banding pushed him to learn at a faster and higher pace, he said, while also forming friendships with his peers from other classes.

The schools are also glad that students will have the chance to challenge themselves in humanities.

Mrs Marion Tan, St Andrew's principal, said: "Before we started subject-based banding last year, our lower secondary students only took subjects at the level of their stream. And for many it was as if they were imposing an artificial cap on how far they should challenge themselves for any subject, even if they had the interest and aptitude for it.

"With subject-based banding, we have students who are willing to push themselves further to realise their potential in a given subject with the help of their teachers. And it often encourages them to excel in other subjects or areas of their school life as well."