SINGAPORE - Seventeen primary schools have had more than half of their Primary 1 places filled with siblings of current pupils after day one of the first phase of registration.

By the end of the entire Phase 1, a total of 22 schools had more than half the places filled.

This is more than double the eight schools in last year's P1 registration exercise.

Phase 1 is for children whose siblings are currently studying in the school that they want to apply to, and the results were announced by the Ministry of Education (MOE) on its website on Friday (June 29).

Other schools with more than the usual share of its pupils' siblings include Rosyth in Serangoon North, with 156 of 300 of its spots taken. Henry Park in Holland Road has filled 160 of its 300 places.

Other popular schools still have more than half of their places available. 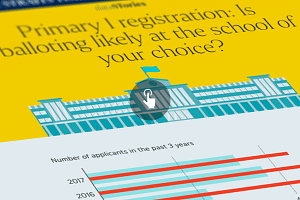 To cater to the larger number of Dragon Year babies born in 2012, there will be 2,600 more Primary 1 places available, Education Minister Ong Ye Kung had said on Wednesday. This brings the number to about 41,800 places in the 184 primary schools.

Six-year-old Celeste Lee will be joining her older siblings, nine-year-old Cherise and Kayson, seven, at Chong Fu Primary School in Yishun. Their mother Lee Ah Nee, 41, who works in the legal department of a life sciences firm, hopes this means an easier time for her youngest. "When Cherise entered primary school, it took her about three months to get used to how different it was from her childcare centre. Celeste knows she has her jie jie and kor kor in the same school, so she is already more at ease."

Ms Jennifer Chong, 41, was thinking about trying for a place at Rosyth for her six-year-old son, Joel. But that could mean having to go through a ballot in a later registration phase. So she and her husband decided "to just register him in Poi Ching School in Tampines". That is where his brother Jonas is already studying.

"With both my sons in one school, my husband and I can send them together," said the 41-year-old, who is in administration. "Besides, my heart is too weak to go through balloting."

Correction note: An earlier version of this story said that there were 17 primary schools with over half the places filled after Phase 1 of Primary 1 registration. It was actually after day one of Phase 1. We are sorry for the error.