Education is vital to Singapore's future and the education system here has been designed to bring out the best in each student, said Prime Minister Lee Hsien Loong yesterday.

Speaking at an Edusave award ceremony in Townsville Primary School in Ang Mo Kio, Mr Lee said that no one in Singapore should be put off from pursuing education due to cost, which is why it has always been kept affordable to all.

In recent years, the education system here has made big steps to cater to students of mixed abilities.

Secondary schools are moving away from streaming, which will be replaced by full subject-based banding by 2024, and the Primary School Leaving Examination scoring system has also been broadened to reflect a pupil's individual performance, regardless of how well his peers have done.

Moves like these reflect how students here are not forced to fit into the same academic mould, noted Mr Lee, who is an MP for Ang Mo Kio GRC. He added: "Education is one of the most important things that Singaporeans have.

"And it is one of the most important things that the Government pays attention to because we believe that through education, we can help our citizens gain skills, learn knowledge, become productive and useful, become good people and make a living for themselves."

At ceremonies over the past two days, Mr Lee presented two types of awards to more than 1,100 students in his Teck Ghee ward, in recognition of their efforts in school.

The Teck Ghee Citizens Consultative Committee (CCC) Bursary was awarded to 351 students, while another 760 received the Ministry of Education (MOE) Edusave Awards.

On Saturday, Mr Lee gave out the 351 bursary awards and 241 Edusave awards. The remaining 519 Edusave awards were given out yesterday. 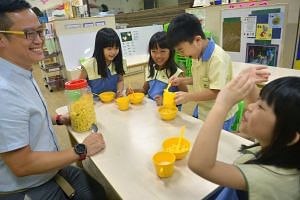 Lower tuition fees at polys, universities for needy students from next year as higher bursaries kick in

Recipients of the Teck Ghee CCC Bursary awards received between $250 and $550, depending on the level of study. The awards were given to students based on factors such as household income, recommendations from school principals, academic achievements and conduct.

The amount each student received for the MOE Edusave award ranged from $200 to $500. These awards were given to students based on their character, leadership, conduct, learning dispositions and academic performance.

The money for the bursary awards was raised by the grassroots organisations.

During his speech yesterday, Mr Lee noted that the Government will continue to give support to students and make sure the education system in Singapore is affordable and of high quality.

It was announced last year that fees in both pre-schools and institutes of higher learning will be lowered this year.

A version of this article appeared in the print edition of The Straits Times on January 06, 2020, with the headline 'Education system designed to bring out best in every student: PM'. Subscribe
Topics:
More
Whatsapp Linkedin FB Messenger Telegram Reddit WeChat Pinterest Print Purchase Article Copy permalink